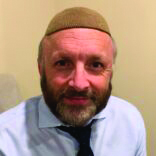 As an Orthodox rabbi in Omaha, Nebraska, people often want to know what it’s like to live here in the middle of America. The most common questions typically go something like this: “How many Jews are there?” “Do you live on a farm?” And of course, “Do you know Warren Buffet?” (The answers: about 9,000; no; I wish!)

After addressing these questions, I describe Omaha as a city where people are nice for no reason. As someone who grew up in Brooklyn, I have learned a lot from the slow pace and the positive impact that a lack of traffic has on the human psyche.

But my utopian bubble was punctured as I observed the polarization and discord that’s happening throughout America hit here as well. Friends and neighbors have stopped talking to one another over their diverging opinions on political issues, vaccines and masks.

While my new home feels divided, the unity I see during my “summer job” gives me hope that we can rebuild mutual respect in spite of our tremendous differences and the tremendous challenges we face.

In addition to my rabbinic duties in Omaha, during the summers I relocate to New York’s Catskill Mountains, where I have served as the co-director of Camp Simcha, a medically supervised overnight camp for children with life-threatening illnesses and chronic disease, for over 20 years.

In camp, our bunks are filled with children and staff from all religious backgrounds and walks of life: Zionists and Satmar Hasidim, Orthodox and secular Jews, and everything in between. Though they may have differing worldviews, they are able to discover common ground and find strength in one another.

A few summers ago, I was lucky to meet two incredible young campers: Matthew, a Reform Jew from Dallas, Texas, and Chaim, a Vizhnitz Hasid from Monsey, New York. Matthew had never met a Chasidic Jew, and Chaim had not personally known any non-Orthodox Jews. Through their shared experiences as leukemia survivors, the two formed a special bond and have remained close friends until this day, sharing in each other’s joyous occasions.

Matthew and Chaim are my inspiration. While their day-to-day lives feel very different from the outside and the challenges they’ve faced are daunting, they teach us that there is more that unites us than keeps us apart and that we can learn from one another without sacrificing who we are.

This work requires us to set aside the safety of our own bubbles — and to think about what we can do for others. In the Talmud, Rabbi Shimon asserts that a person should study Torah all day. Rabbi Yishmoel disagrees and says a person should earn a living and engage with others to complement his Torah learning.

The Talmud concludes that many have tried to study all day like Rabbi Shimon’s directive and failed. In explaining this conclusion, in his Sefer Ein Ayah, Rav Avrohom Yitzchok HaKohen Kook states that when a person studies all day and is not on the lofty level of Rabbi Shimon, and does not to do mitzvot and engage with others, all he becomes is his mind. If one is only engaged in their mind and their own opinions, they will lose appreciation of others. They then tend to become argumentative and divisive.

At Camp Simcha, our counselors and staff members have one goal: to give each child the most joyous, fun-filled experience possible. When you are compassionate and giving, you tend to look for the best in others. You try to understand others. And you quickly realize life is too short to dwell on what divides us.

Unlike the world of online vitriol, our camp focuses on kindness. We get to know one another, we sing and dance together, we play, we talk, we ask questions, and we build up each other without losing sight of our unique identities and what makes us each so special. Hence Rav Kook’s teaching: The way to increase harmony within diversity is to engage and to give to one another.

Rabbi Ari Dembitzer is the co-director of Chai Lifeline’s Camp Simcha and rabbi of Beth Israel Synagogue in Omaha, Nebraska. This piece was originally published by JTA.