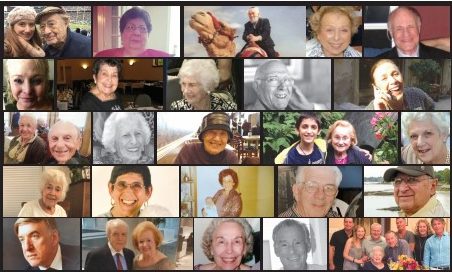 In April 2020, the Jewish Exponent ran the first segment of “Those We’ve Lost to COVID-19.”

The series aimed to pay tribute to those who died of a disease that threatened to overwhelm their memory with staggering death tolls and frightening symptoms.

One year since the pandemic began, the Exponent has featured 25 people in six sections of “Those We’ve Lost,” and the names of new coronavirus victims continue to appear in the newspaper’s Death Notices section and staff inboxes. These names belong to Jewish teachers, veterans, clergy, doctors, business owners, nonprofit workers, athletes, artists and more.

This is by no means an exhaustive list of members of the Philadelphia Jewish community who have died of COVID-19 over the last year, but it is a tribute to those we covered thanks to the outreach of their loved ones.

Most of the people below received more extensive coverage at the time of their death. Two of the people, Ashley Altman and Susan Love, were not covered in one of our “Those We’ve Lost” installments, so they get a little extra detail here. For the others, we chose a couple of humanizing details about them to remind you of who they were.

March 2020
Dr. Irvin Kean, 95, worked out twice a day and walked the golf courses of Sarasota, Florida, six days a week. He was a dentist for 43 years.

April 2020
Rebbetzin Rachel Altein, 95, was an influential leader within the Chabad Lubavitch movements and worked at the Chabad Women’s Organization’s publication Di Yiddishe Heim (“The Jewish Home”) as its English-language editor.

Eileen Chanin, 74, taught herself to play the piano one-handed after an injury. She had an adventurous spirit and traveled to Morocco with her 1-year-old as a young mother.
Loretta Coleman, 85, was born in London during World War II and married Gerald Coleman, a “bespoke tailor from Liverpool,” as her son Rabbi Alexander Coleman
put it.

Margit Feldman, 91, was born in Hungary and survived Auschwitz and Bergen-Belsen. She served on the New Jersey Commission on Holocaust Education for more than 40 years, helped pass a state law mandating a Holocaust and genocide curriculum in public schools and co-founded Raritan Valley Community College Institute for Holocaust and Genocide Studies.

Ethel Hamburger, 92, was a longtime Sisterhood leader at Beth El Congregation in Bethesda, Maryland, the 1947 Chicago Jr. Hadassah Membership Queen and one-time Congregant of the Year at Beth Sholom Congregation in Elkins Park.

Sylvia Millrood, 82, was the first president of the Sisterhood of Congregation Or Shalom, which she founded with her husband, Bernard Millrood, in 1974. She was an artist who loved painting, needlepoint and sculpture.

Gloria Allen Moskowitz, 88, was the former administrative coordinator of John Bartram High School Motivation Annex, where she was known for her dedication to underserved students. “If you called her up she had time for you no matter when it was, no matter how long it took,” daughter Susan Goldman
said.

Eve Rudin, 103, was a passionate liberal political activist. “She went door-to-door against McCarthy and had a lot of influence on me,” daughter Marion Rudin Frank said. “She was very much for women having an equal opportunity.”

Roy Gomer, 83, was a dedicated father and loved taking care of his grandchildren. His wife, Bobbie Gomer, 79, was a fixture of the Philadelphia bridge scene and achieved the distinction of Platinum Life Master. They died within one day of each other.

Libbie Rubin Greenbaum, 96, enjoyed swimming, tennis and bridge. She was active in the Sisterhood of Main Line Reform Temple and Hadassah.

Arlene Horowitz, 78, was a former art educator in the Haverford School District and created the program Art Goes to School. She loved throwing parties, whether it was for the High Holidays or a random Tuesday.

Melva Klebanoff, 95, taught art at Samuel K. Faust Elementary in the Bensalem School District for more than 25 years. She was an artist, and her true love was painting.

Avraham MacConnell, 72, served in the Vietnam War and became a Philadelphia police officer when he returned from military service. He worked as a detective in the sex crimes unit of the Juvenile Aid Division and received a commendation for going undercover to expose a youth detention center abuse ring.

Nola Schwartz, 85, was a businesswoman who enjoyed treating her loved ones to Broadway shows and fancy meals in New York. She had a sharp sense of humor and was beloved by her nieces and nephews.

December 2020
Ashley Altman, 100, was a World War II veteran who earned a Bronze Star for his work tracking enemy troop movements before the Battle of the Bulge. He worked as a real estate developer in Philadelphia after his honorable discharge.

He was a charter founder of the Ellis Island Project and the U.S. Holocaust Memorial Museum and supported many Jewish charities. He also established the Sandra Altman Brain Tumor Research Fellowship and Visiting Professorship at Penn Medicine in honor of his wife, who died of a brain tumor at 45.

Altman was an avid Philadelphia sports fan and particularly loved the Phillies and the Eagles, but his favorite tickets granted admission to the sports games and recitals of his grandchildren. During the pandemic, he assured his family of his safety by sending out “The Daily Mail” emails, which included reports of current and historical events, jokes, favorite music and assorted wisdom.

Bernice Bricklin, 93, was a lawyer who loved Judaism and feminism. She organized and volunteered for countless political causes and her daughters remember her boundless energy.

Sally Hoberman, 91, grew up speaking Yiddish with her grandparents, who immigrated from the Pale of Settlement. She would have celebrated her 70th wedding anniversary with husband Leonard Hoberman in January.

Dr. Gilbert Liss, 91, delivered more than 8,000 babies throughout his career as an OB-GYN. He was a skilled baker and taught members of his synagogue to bake challahs and hamantaschen.

Dr. Robert Pollack, 94, was a scientist, author, Navy veteran and former chair of the department of biochemistry at Temple University’s School of Dentistry (now Kornberg School of Dentistry) He loved running into his students on the street.

Dr. Ronald Rosenthal, 88, was a dentist for more than 50 years. He was beloved by his community of patients, who often invited him to their weddings and bar mitzvahs.

Alan Tripp, 103, was a writer, broadcaster and marketer. He recorded “Senior Song Book,” an album of original songs, with his writing partner Marvin Weisbord at age 102. The album garnered national attention and was covered by CBS, NPR, The Washington Post and even “The Kelly Clarkson Show.”

Saul Victor, 82, was the owner of Pearlstein’s Furniture and a professional lead singer in his own band, the Saul Victor Trio. Family simchas weren’t complete until he sang his signature song, Neil Diamond’s “Sweet Caroline.”

January 2021
Mary Heller Cope, 86, was passionate about public service and education. She was awarded a citation from the Pennsylvania House of Representatives for her exemplary record of service in 1995.

Susan Love, 58, was the CEO of the retirement community Lions Gate in Voorhees, New Jersey. Her door was always open and she regularly worked 13-hour days during the pandemic.

She was a member of the board of trustees of LeadingAge New Jersey & Delaware, and was appointed to an advisory board within Seton Hall University’s Stillman School of Business before she contracted COVID-19.

Her strong work ethic fueled her as she earned a master’s degree and a license in nursing home administration, and her kind demeanor earned her the trust and friendship of residents, staff and the community. She loved monkeys, chocolate and golfing with her parents in Boca Raton, Florida.

Edward Malinoff, 84, was a Philadelphia sports fan and enjoyed visiting the Jersey shore. He loved music and remembered the lyrics to songs from old movies with great accuracy in his later years.