Changes to a United Kingdom bill on domestic abuse make it easier to punish Jewish husbands who refuse to grant a religious divorce, or get, a British-Jewish newspaper reported.

The changes came in amendments to government-sponsored legislation that passed two out of three readings in the House of Commons, the Parliament’s lower house, the Jewish News of London reported last week. The measure is expected to pass.

The Domestic Abuse Bill and the Serious Crime Act were amended to clarify that coercive behavior by spouses, which is proscribed by law, can occur also when the partners are not in an “intimate relationship.” The change has implications for Jewish couples who have separated but are still considered married for the Jewish Orthodox law because the husband will not agree to a divorce.

If convicted of coercive behavior, recalcitrant spouses may face up to five years in jail.

In Orthodox Judaism, a religious divorce can be declared only with the consent of both spouses. Unlike wives, husbands may get special permission from rabbinical judges to dissolve the union even if their spouse refuses to agree.

In recent years, courts in the European Union, Israel and the United Kingdom have cracked down on recalcitrant husbands by fining them, limiting their movement and, in rare cases, imprisoning them for spousal abuse.

However, Jewish Orthodox law does not recognizes divorces entered into coercively, leading to new complications in cases involving punitive measures. 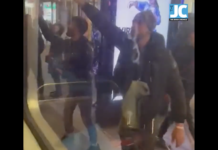