On Feb. 19, the Jewish Federations of North America released its annual list of approved conversation topics for the upcoming Pesach celebrations. For the 5781th consecutive year, according to the report, the list of acceptable topics has been significantly reduced.

“Tie-dye! You really would’ve expected that tie-dye would remain more or less uncontroversial,” CEO Jacob Netanyachoo wrote in a press release. “But that’s the way of the world these days.”

Discouraged topics now include snowmen and snow globes, any sort of flickering lights (especially strobes), the Main Line, the R5, prior attempts to shuck and/or jive, Flat Stanley, Stan Lee, “Thor: Ragnarok,” Gamestop (the store or its stock), chicken cooked in schmaltz, any SUNY school besides New Paltz, the last time you saw “The Last Waltz” and the collected works of Adin Steinsaltz.

Additionally, families sitting down for seder are advised to avoid any discussion of crank calls, pratfalls, foul balls, symmetrical rhyming schemes, the Art Museum steps, the Eurasian Steppe, Ciara’s “1, 2 Step,” Sepp Blatter, rickety ladders, anything that matters, “The Call of the Wild,” whether your expense report was filed, calling JFK “Idlewild,” small magazines, German submarines, deviation from the mean and the Tammany Hall political machine.

Bubbe Convinced ‘This Could’ve Been Avoided if You’d Just Worn a Coat!’

Lenora Unpronouncskiwitcz, 84, cited a trip you took to the grocery store in February of 2020 as the indisputable beginning of the COVID-19 pandemic.

“No coat, no gloves, no scarf, no matter what I told you,” Unpronouncskiwitcz said. “You’re surprised you got a cold, and then everyone did?”

Unpronouncskiwitcz, playing on your guilt for calling a little less than you should, reports that the weather that day was “yucky,” and “cold enough to catch your death.” Ignoring her, deciding that you were old enough to make your own decisions about your fitness for the weather, you stepped outside to find that it was indeed a little cold. But you’d be damned before you’d go back inside to prove
her right.

In a finding that could radically alter our understanding of the pandemic’s genesis, Unpronouncskiwitcz has pegged its inception to the moment you decided to just turn your car’s heat way up instead.

Though Unpronouncskiwitcz has no background in epidemiology, no special feel for virology, and only the broadest understanding of the human respiratory system, she is certain that this whole mess would’ve never happened if someone learned to respect their elders.

Rabbi Thomas Chongstein of Congregation Beth Stoner in Center City came to a startling conclusion the other day.

“Man, there must be something going on because the only people showing up for services were Cantor Snoop Doggberg and one congregant, Richard Marin-Cohen, who we call Cheech because he looks like a kosher pork rind,” Chongstein said. “But I was walking around outside and saw some dudes wearing masks and asked them what was happening.”

“It blew my mind when those dudes said there was a pandemic or something going on. No wonder nobody was showing up!”

Chongstein described the pandemic as a real bummer, but saw the positives in it, too.

“The Man [the police] has stopped hassling us and our indoor garden is growing better than ever. Our Maiu Wowie, Acapulco Gold and Thai Stick plants look especially far out and solid,” he said.

As part of a charitable effort and a way to share the bumper crop, Congregation Beth Stoner announced a “Marijuana for Masks” program debuting on Feb. 31. Anyone bringing in new masks to be distributed to the poor will receive an ounce of their favorite weed.

Infant Sets Record for Number of Ys in First Name

Center City resident Bryaydyyn Wasserman landed in the “Guinness Book of World Records” a mere eight days after his birth for an unusual accomplishment: having four Ys in his first name.

“We had no idea he was so unique,” mother Rebecca Wasserman said. “We just liked the name.”

Father Adam Wasserman said he and his wife named their new son after his late grandfather, Bernard, but “Bernie” felt too old-fashioned. They wanted something a little more modern, something with pizazz.

“Plus we didn’t want people thinking we named him after Bernie Sanders,” he said.

They narrowed it down to Bryan and Braydyyn and decided to combine the two in a new name that would symbolize the spirit of compromise.

The extraordinary infant, whose other talents include drooling and napping, toppled the previous world record of three Ys in a first name, which was held by Cyyynthia Green of Minneapolis. Green did not respond to requests for comment by press time.

Bryaydyyn’s middle name is Samuel, after his late grandmother Samantha, and his Hebrew name is Boaz.

“I just think it’s really unfair,” said Susan Tenkin, who lives with her Tonkinese, Allan, in Center City. “Allan has all kinds of funny things he does — he responds to me when I talk to him, he fetches, and he wears a bow tie and footie pajamas every day.” Tenkin, who observes Shabbat and therefore does not go online on Saturdays, feels she and Allan are missing out on many messages of approval from strangers.

“My friends and family all know Allan and see him on my feeds all the time,” she said. “But if this didn’t take place on Shabbat, he could be the next GrumpyCat, with a book deal, a stuffy — the sky’s the limit.”

She does post Allan’s photos on Saturday night after sundown, “but by then the damage has already been done,” she said. “And Caternight is not a thing.”

Tenkin and other frustrated photo-taking cat owners are trying to change Caturday observance to Sunday, but have found themselves stymied by the lack of a catchy hashtag.

They tried “SundayforMyOne andOnly,” but it was quickly co-opted by dog owners, who posted soulful cheek-to-cheek pics with their obscenely affectionate pit bulls.
“The dog people are just outrageous,” Tenkin said.

“They’re so superior. Did you know that cats can communicate with those buttons even better than dogs? And they’re not just saying ‘feed me’ all the time.
“Caturday is the only thing cat people have to themselves, and it’s awful that it’s not more inclusive.”

Experts at Heck University have published a study that shows almost no one is using Zoom’s mute button correctly.

“The findings were definitely surprising,” said Dana Goldfarb, professor in the Department of Sociology. “When lots of people have to learn how to use technology in a short period of time, there’s bound to be some hiccups, but our research shows there’s a 75% chance you’ve been on mute while trying to impress your boss with an important PowerPoint.”

“Our data indicates that there’s also a 55% chance you’ve ruined a public Zoom event by neglecting to mute yourself while your cat knocks a stack of dishes off the counter and your four dogs bark in the background,” Goldfarb added. 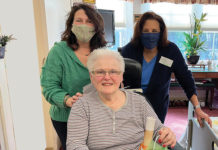 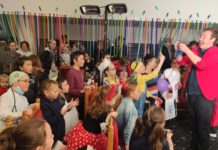