This cake was born out of a surplus of coconut cream. My daughter used a portion of a can for quinoa porridge, and I wanted to use the rest before it went bad.

I am always on the lookout for tasty pareve desserts, and this one fit the bill. The cake itself is a riff on a traditional vanilla batter cake that is topped with caramel.

The caramel glaze, which normally uses heavy cream and butter, came together with coconut cream and coconut oil instead. I used unsweetened coconut for the topping — toasted then mixed with confectioner’s sugar — but sweetened, flaked coconut would do the job, too, toasted or not. Hence the “triple coconut cake” moniker.

Because it is pareve, the cake can follow any dinner. And it can go in many different directions.

There is definitely a Southern vibe: Coconut layer cake is an iconic and traditional dessert down South.

But I also feel this pulling to South Asia — Thai, Indian, Malaysian and other cuisines in that part of the world use a lot of coconut in both savory and sweet dishes. You could certainly highlight that culinary geography by adding chopped fresh mango as a garnish at the table or mixing ginger or cardamom into the cake batter.

And there’s an association with Mexican and Central American cuisines, which frequently use coconut as an indigenous ingredient. Consider adding lime zest and juice to the various components, or serve it with sliced pineapple to enhance the Mexican angle.

If you want a crunchy topping that doesn’t involve coconut, you can toast chopped almonds, pecans or walnuts — or skip that step entirely and let the caramel glaze stand on its own.

Triple Coconut Cake
Makes a 9-inch round cake, or about 8 servings, depending upon how you slice it

Heat your oven to 350 F, spray a round cake pan with oil, line it with parchment, then spray the parchment. Set it aside.

In a mixing bowl, blend the coconut oil and sugar on medium until fluffy. Add the eggs, one at a time, mixing well after each. Add the coconut cream and blend again. Sift the dry ingredients into the bowl and mix until fully blended. The batter will be thick.

Scrape the mixture into the prepared pan and bake for 35 minutes until done and lightly brown. The cake is done when the center springs back when lightly pressed with your finger or a toothpick comes out clean.

Cool the cake for a few minutes and, when it is cool enough to handle, invert it, removed the parchment and place it back in the pan or on a cake plate to glaze. Using a skewer or chopstick, poke holes in the cake so that the caramel can permeate when poured over.

In a medium saucepan, melt the sugar and water over medium heat and let boil until caramelized; this will take about 10 minutes. It must be watched carefully, as once it begins to caramelize it will go from liquid gold to scorched black tar quickly.

When the sugar and water mixture has reached a golden color and a syrup-like texture, add the coconut cream. Stir and allow it to blend to a smooth texture. If the sugar crystallizes, don’t worry, just keep stirring over a low heat until it melts again. Add the coconut oil, and stir again until the caramel is golden and thick.

Pour the hot caramel slowly over the cake, allowing it to drip into the holes. Let the cake cool a bit before topping it with toasted coconut.

In a medium-sized skillet, heat the coconut over medium, stirring and turning occasionally with a spatula, while watching carefully. After about 8-10 minutes, the coconut will begin to turn golden — once it starts to brown, the toasting happens quickly. Stir until all of the coconut is toasted, and pour it into a small bowl. Add the sugar and stir.

Pour the toasted coconut over the caramel glaze on top of the cake. 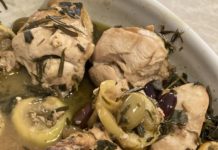