Everything about Keshet Kitchen, a Middle Eastern comfort food restaurant set to open in March in South Philadelphia, is a burst of exuberant color.

There’s the name, for starters: “Keshet” is Hebrew for rainbow. There are the eye-poppingly bright dishes, the kind of yellows and purples and oranges that come with the territory of good food from Israel and the region. And then there’s the executive chef and owner, Sharon Shvarzman, the son of Israeli immigrants to Brighton Beach, New York, who raised their son in the restaurant business.

Shvarzman was deemed sufficiently colorful to appear on two Food Network television programs in the past, and now he’ll bring that same sensibility to Keshet Kitchen in Queen Village.

“Our goal is to completely change what people’s idea is of Middle Eastern food,” Shvarzman said. “So yes, you can have mac and cheese and have it Middle Eastern-style.” The key: harissa.

Shvarzman and his partner, Abraham Bloom — also of Brooklyn, also of Israeli ancestry, also the son of food industry professionals — moved to Philadelphia from New York last summer so that Bloom could pursue a doctorate in physical therapy. Though they quickly came to love their adopted home, and especially Queen Village, moving during the pandemic made it difficult for them to meet other Jewish people.

Shvarzman dreamed of opening his own restaurant for some time, inspired by his parents’ long-gone Mediterranean spot and his grandparents — a baker and a chef. Underwhelmed by Philadelphia’s Middle Eastern offerings, and determined to create a little haimish feeling in a time that can seem devoid of such comforts, Shvarzman and Bloom decided to give the dream a shot. Thus, Keshet Kitchen was born.

The pair teamed up with New Jersey-based public relations representative and consultant Morissa Schwartz, a longtime friend of Shvarzman’s, who he’ll rely on heavily in the opening months. At a time when foot traffic is low, a strong social media presence will be key for the new restaurant.

The trio wants Keshet Kitchen to become a social magnet when indoor gatherings become a part of life again, a fragrant way to bring friends and family together over Shvarzman’s take on Middle Eastern food. There will be staples like falafel and shawarma, but there will also be pine nut and olive meatloaf and Shvarzman’s Israeli grandmother’s spin on borscht.

Shvarzman first made a name for himself as a cook when he appeared on the Food Network’s “Worst Cooks in America.” He swears that his appearance on the show was not a reflection of his skills as a chef, but rather the result of a friendship with one of the show’s producers, who saw his obvious talents for the screen. He later competed in another Food Network show, “The Great Food Truck Race.”

“The show has done me right,” Shvarzman said. “I graduated Food Network university.”

The grand opening at 705 E. Passyunk Ave. will be in mid-March, and though it can’t be the proper indoor dining experience that the trio wants to provide just yet, their collective excitement for Keshet Kitchen will be hearty enough to subsist on for the cold months to come. In Shvarzman’s telling, it’ll be the place Jews of all stripes to forget about their differences for a while.

“It doesn’t matter if you’re a Cohen or a Liebowitz or a Schwartzman or a Schwartz,” Shvarzman declared. “We are a family that all came from the same Jews, our ancestors dealt with the same hell that we are all dealing with today.” 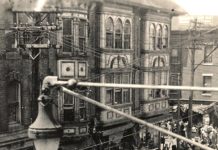 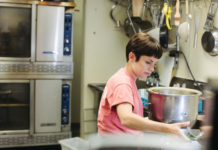 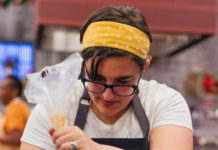