One year ago, Dallas’s Jewish community convened a “health crisis management team” to coordinate the local response to the brand-new COVID-19 pandemic.

Now the community has repurposed the team, consisting of rabbis from each denomination and the CEOs of local Jewish agencies, to take on a very different kind of crisis: the unfolding effects of an unusual winter storm named Uri that has crippled large swaths of Texas and left millions of people without reliable access to heat, electricity or clean water.

So far, the group has gotten aid to seniors and people without electricity. Synagogues and their congregants are offering shelter to those without power. And the Jewish Federation of Greater Dallas partnered with Kosher Palate, a local kosher restaurant, to deliver thousands of meals to Jews without power — a project the restaurant began on its own and accelerated with the federation’s aid.

“I keep saying this is what Federation was built for,” said Mariam Shpeen Feist, the group’s president and CEO. “We were built to respond to crisis.”

Texas is home to around 130,000 Jews, the majority located in the Dallas and Houston areas. The state, and its Jewish population, has experienced no shortage of recent crises. In 2017, Hurricane Harvey decimated the Houston area, flooding thousands of Jewish homes and causing millions of dollars in catastrophic damage to several synagogues and other Jewish institutions. In 2019, a Category 3 tornado struck Dallas, bringing more property damage to Jewish communities. And of course the pandemic has challenged every aspect of Jewish and communal life.

The toll of the latest disaster — rare in a state with a generally temperate winter climate — is still taking shape. As of Thursday morning, nearly 500,000 homes and businesses remained without power, with large swaths of the state’s grid remaining down. Hospitals are running out of water. Some 7 million residents are under a boil-water advisory. At least 30 deaths linked to the storm have been reported. And residents are burning furniture to stay warm, according to reports.

Meanwhile, another storm is on the way.

“It’s pretty dire in the city right now,” Steve Adler, the Jewish mayor of Austin, the state capital, told a local TV station on Thursday morning as he joined many Texans in asking why the state’s energy grid was not prepared for sub-zero temperatures. “It’s too much to ask of anybody. People are angry and confused and frustrated, and I am, too.”

For many, the anger is being driven by what they perceive as a lackluster response by state leaders. Former governor Rick Perry suggested that Texans would prefer a few days without heat to federal intervention in their power system, and Sen. Ted Cruz flew to Cancun for a planned vacation on Wednesday night in the Mexican resort city. Both are Republicans.

Jewish communities, like others across the state, are taking steps to address their own needs. In Dallas, one of the region’s two Jewish senior living centers lost both its main power and backup generator, forcing the staff to quickly relocate residents to the area’s other senior center — fortunately it had spare room, having just recently opened.

“It’s been pretty wild out here,” Hannah Lebovits, a professor at the University of Texas-Arlington who lives in an Orthodox community in north Dallas, said of the rolling blackouts, which accompany other problems like loss of heat and water pressure. “Thankfully in the Jewish community, very often we quickly create our own mutual aid systems.”

Still, Lebovits said, “It shouldn’t be Chaverim doing that. It should be the city of Dallas knocking on my door and checking on me.”

In Houston, too, Jewish leaders are leaning on coordination groundwork laid long before the unusual cold snap set in. Traumatized by the patchwork Jewish response to Hurricane Harvey’s devastating floods, the Jewish Federation of Greater Houston had convened the Jewish Response and Action Network in early 2020, even before the pandemic.

“After Harvey, each shul made its own response. They made their own food. It wasn’t coordinated,” said Jackie Fisherman, the network’s director and the Houston federation’s director of government affairs. “We thought there must be a better way.”

This week, the Houston federation has taken steps to mitigate the impact of the winter storm on greater Houston’s Jewish community, which numbers around 55,000 and skews older. The group has helped procure fuel for a backup generator at an assisted living facility, been part of the distribution of 10,000 water bottles to the community and assisted a few individuals in need of electricity secure generators from the city — while continuing to work with local Jewish leaders on an ongoing COVID response plan.

Some on the ground in Houston, including representatives of the federation, say many Houston Jews live in areas that have avoided the worst of the outages, although the lack of reliable cellphone service and other communication issues all week has prevented response teams from drawing a clear picture. But challenges still lie ahead, as the Houston area, like much of Texas, has fallen under a boil-water advisory. Many frozen pipes are expected to burst when they thaw.

“Training makes you better, and there’s really no way to train through a disaster until you’ve lived through it,” Fisherman said. Nevertheless, she added, “I’m looking forward to a really boring job in the future.”

Houston’s Jewish community has also helped the city’s broader response when it comes to the COVID vaccine. Power outages have affected statewide distribution of the vaccine, which needs to be kept at freezing temperatures until it’s ready to be used. In response to a sudden urgent need this week to distribute doses of the vaccine, United Orthodox Synagogues in Houston quickly offered its building as a vaccination center, and successfully orchestrated 350 doses to the community in a manner of hours. 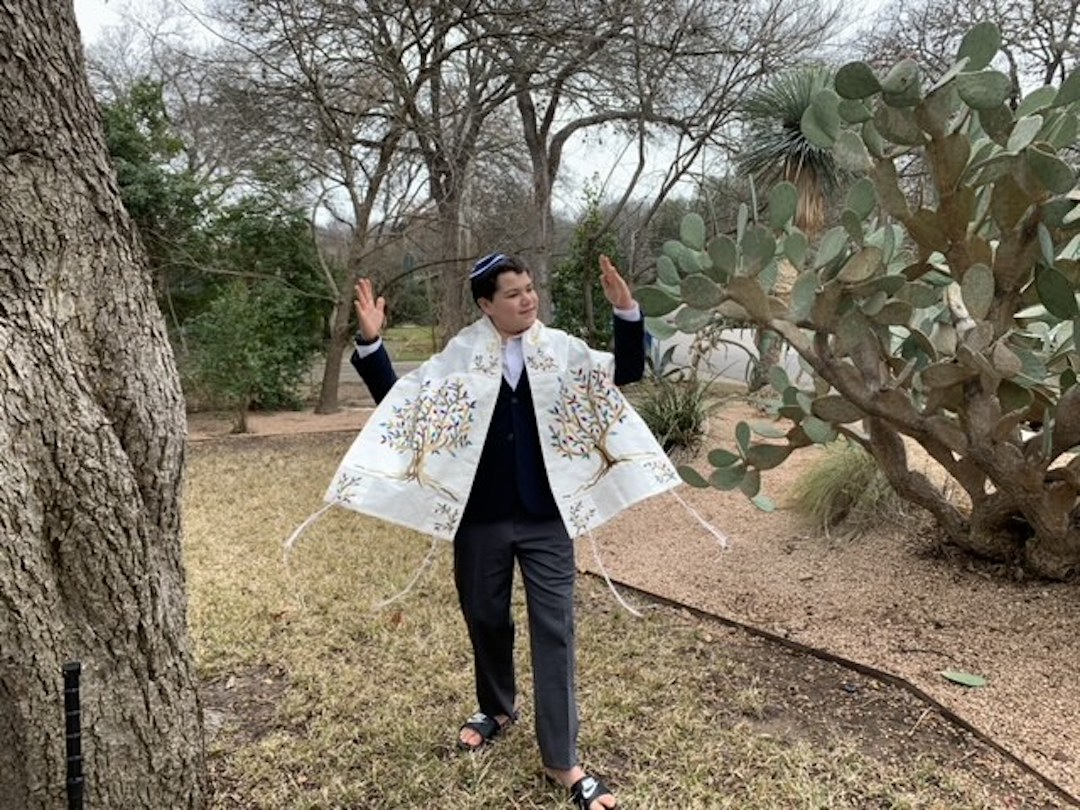 Austin resident Sam Robinson celebrates becoming a bar mitzvah in his backyard after a power outage at his synagogue from Winter Storm Uri scrapped his plans to read from three Torahs on the bimah. (Photo courtesy of the Robinson family via JTA.org)

Amid the challenges of the moment, Jewish life for some Texans has found a way to continue. In Austin, Sam Robinson became a bar mitzvah last weekend.

The family had already made plans to conduct the service over Zoom due to COVID, but found that they still had to scramble last minute to meet the challenges of the moment when their synagogue, Congregation Agudas Achim, lost power and had to contend with an iced-over parking lot that prevented them from even getting close enough to the building to handle the Torahs.

Instead of reading from three of the congregation’s Torahs from the bimah, as he had been planning to do to correspond with Rosh Chodesh and Shabbat Shekalim, Sam had to perform the service from his house, reading off of photos of the Torah portions his dad had taken on his phone.

“All our plans, we basically had to scrap them and frantically get the house ready,” Sam said. “We did it on the dining room table. We just shoved everything off it.”

Less than 24 hours after Sam’s bar mitzvah, the Robinson household lost power, too. With the sudden drop in temperature, Sam’s mother, Rachel, also found a use for the many hats, scarves and blankets she had taken to knitting in her spare time since the start of COVID. Rachel added that the Robinson family may find themselves dipping into their year-old supply of Passover matzah if they are unable to cook.

“It certainly kept us on our toes, tested our resiliency,” Sam’s father, Alex, said. He thanked his congregation for its flexibility in putting on the event.

Sam said he’s “still salty about not getting three Torahs,” but he’s happy with how his bar mitzvah went.

Agudas Achim’s leader, Rabbi Neil Blumofe, wrote on Facebook Thursday morning that conditions in Austin remained difficult, even as his own power had returned after more than 50 hours.

“While this crisis will eventually pass, we will not forget the misery of these past few days — how some in our community are fully possessed by hesed and how others lead with indifference and callow self-interest,” Blumofe wrote, using the Hebrew word for kindness to those in need. 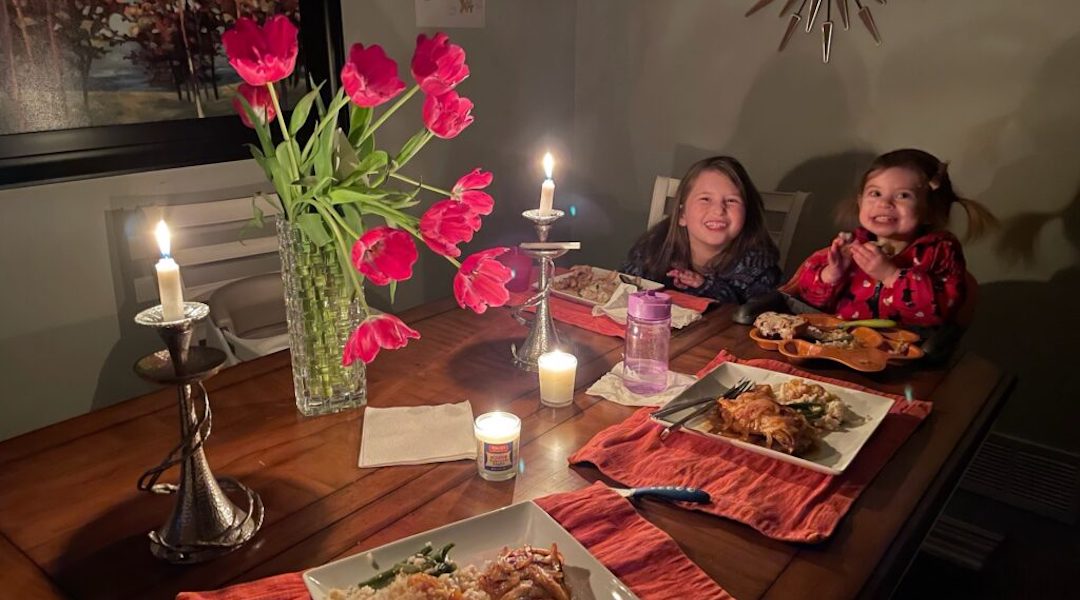 In Dallas, Rabbi Shira Wallach of Congregation Shearith Israel, a Conservative synagogue, dug into her supply of Shabbat and yahrzeit candles to keep her family’s household warm when their power went out. She said the couple’s two daughters, aged 1 and 5, instinctively covered their faces, thinking it was time to recite the blessings.

That moment provided levity during a challenging time — one that Wallach’s husband and fellow rabbi, Adam Roffman, said was appropriate for this moment on the Jewish calendar. Purim, a festive holiday in which celebrations are supposed to give a sense of topsy-turviness, begins next week — when the temperature is forecast to climb to a more typical 70 degrees.

“Here we are in Dallas, Texas,” Roffman said. “The rest of the country’s laughing at us because we’re the energy producer capital of the country and we have no heat or power. That’s a pretty Purim-type situation.” 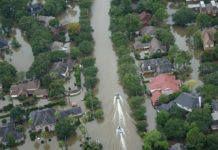 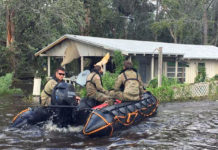 Hurricane Overload: Houston Rebuilds, Floridians Unsure of When to Return 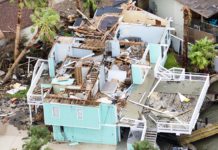