Nearly three in 10 Republicans believe the claim driving the QAnon conspiracy theory, according to a survey released last week by a conservative think tank.

According to the survey by the American Enterprise Institute, 29% of Republicans believe the baseless claim that former President “Donald Trump has been secretly fighting a group of child sex traffickers that include prominent Democrats and Hollywood elites.” That’s the idea at the center of the false QAnon conspiracy theory, which has gained millions of supporters across the United States and was praised repeatedly by Trump.

The conspiracy theory has also been endorsed in the past by two Republican congresswomen, Marjorie Taylor Greene and Lauren Boebert, though both have since disavowed it.

QAnon, scholars say, is rooted in age-old anti-Semitic conspiracy theories that falsely allege that Jews abduct and abuse children for ritual purposes, and that a shadowy cabal of Jewish elites secretly controls the world.

The survey also found that more than one in four evangelical Christians, 27%, believes the central tenet of QAnon, according to the Religion News Service.

The survey included 2,016 respondents and was conducted in late January. It has a margin of error of 2.7%. 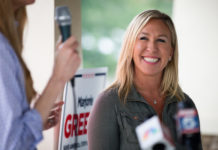