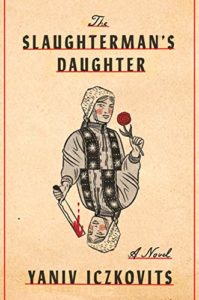 The year is 5654 in the Pale of Settlement (1894 to you Gregorians out there). Mende Speismann’s holy fool of a husband has run off some time ago, leaving her an impoverished agunah dependent on the generosity of her sister Fanny’s comparatively wealthy husband.

In a fit of indulgence, Mende turns the handful of rubles she’s scraped together for survival into a disastrously expensive day at the market, ending her spree only with a plunge into the Yaselda River. She survives, but Fanny, the strange, wolfishly intense younger sister, knows that Mende was born to be a wife and mother, and that she’ll never be happy in the world she returns to unless some things are made right.

Unhappy with her loving but mostly silent husband, and determined to give Mende a better life, Fanny enlists the assumed town fool Zizek Breshov in her journey to find Mende’s husband and force him to sign a get. The road from Motal to Minsk, it turns out, is longer than the miles the pair sets out to cover; the chaos that ensues will ask them to trek across their entire lives, as misunderstandings and a few sticky rumors soon involve the secret police, hostile locals, the czar’s army and a terrible cantor named Shleiml.

Iczkovits, a celebrated Israeli writer with several novels to his name, sets out to tell a rollicking, madcap tale, and mostly succeeds. He populates his story with a mix of original characters and stock Jews, with a nattering mother-in-law here and a cantor straight out of Chelm there. When Iczkovits stays with the perspectives of his most compelling characters — Fanny, Mende, a painter named Ignat Shepkin and Zizek (forced to leave his Jewish name and past behind after he’s conscripted into the czar’s army) — the book is a pleasure. But the time spent with some of the stock characters, as well as with the secret agent of the Russian Empire who’s meant to be somewhat menacing, can be a drag.

Fanny, the vilde chaya of the village and the one-time apprentice to her shochet father, wields her knife across the Pale, slitting and threatening her way to Minsk while she tries to figure out how to reconcile her lives as a mother, wife, Jew and woman. When the narration stays close to the slaughterman’s daughter herself, the novel shines.

Iczkovits’ story is often funny, if a bit old-hat in its sense of humor, which makes the conclusions he appears to arrive at regarding religion, conformity and the calamities to come to these Jews of the Pale feel oddly harsh. He demonstrates real love for the characters of “The Slaughterman’s Daughter,” though the space given to some overestimates the extent to which readers might feel the same. And in a 515-page novel, Iczkovits may have done well to take after Fanny, and carve with a little more precision.