Larry King, the iconic Jewish radio and TV interviewer who never met a subject he didn’t seem to like, has died at 87.

King died Saturday at a hospital in Los Angeles. His company Ora Media released the announcement and did not list a cause, but King had been hospitalized recently with the coronavirus.

King often recalled — sometimes with elaborate embellishment — his roots as a poor Jewish kid in Brooklyn, where he was born Lawrence Zeiger. One of his first broadcast employers, in Miami, had him change his name to King, saying Zeiger sounded too ethnic.

King, whose most famous talk show aired on CNN from 1985-2010, was known for his genial interviews, a contrast with the adversarial style that propelled so many of his contemporaries to fame. He would ask an open-ended question and let his respondents answer at length. It was a counterintuitive approach that nonetheless elicited headlines.

In 1992, King asked oil billionaire Ross Perot what his plans were, and Perot seized the opportunity to announce a third-party presidential run that would change history, helping to oust incumbent George H. W. Bush and install Bill Clinton.

He was an affable presence — no jacket, always in suspenders, dress shirt sleeves rolled up, leaning forward. His guests, perhaps not consciously, were drawn into the ambience and also leaned forward. The dynamic in 1994 led Marlon Brando to kiss King on the lips.

At times, King’s softballs could on a dime turn hard. In 1992, he asked Vice President Dan Quayle, who was identified with the Christian right, if he would support his daughter if she wanted an abortion.

“I would counsel her and talk to her and support her on whatever decision she’d make,” Quayle said. King followed up: “And if the decision was abortion, you’d support her?” Quayle, cornered, said he would, making headlines.

One of King’s few public feuds was with Piers Morgan, who replaced him on CNN, and whose ratings were not nearly as high. Watching Morgan’s show, King said, was “like watching your mother-in-law go over a cliff in your new Bentley.”

King welcomed all comers, saying he interviewed 50,000 people over the course of his career, including every president from Gerald Ford to Barack Obama. (He interviewed Donald Trump multiple times before his presidency, including in 2000 when he was contemplating a presidential run on the Reform ticket.)

King had Louis Farrakhan on his show in 1995 so that the anti-Semitic leader of the Nation of Islam could air an appeal to speak to Jewish leaders, without preconditions. Organizational Jewish leaders, who wanted Farrakhan to apologize for his toxic rhetoric, were not game. In 1996, two years after their kiss, Brando made a different kind of scene when he said Jews “own” and “run” Hollywood, and allow the disparagement of other minorities.

King’s open-ended questions sometimes nonplussed interview subjects. In 1997, he interviewed the Dalai Lama, then on a campaign to raise recognition of the oppression of Tibetan Buddhists by China’s government.

“Our honored guest tonight is his holiness, the Dalai Lama, the exiled leader of Tibet,” King began. “Help us a little, before we talk about China and the conflict, with Buddhism. Is it in conflict with Christianity, Judaism, Mohammed-ism, other isms? Is it a continuation of these faiths?”

The Dalai Lama, whose face had constricted from a serene smile to utter bafflement, said, “What do you mean, conflict?”

Buddhism arose in the Far East, thousands of miles from the three monotheistic faiths King had mentioned and had little interaction with each.

“Do you pray, and if you pray, who do you pray to?” King followed up. “We pray to Buddha!” the usually unflappable Dalai Lama said, his eyes rolling. 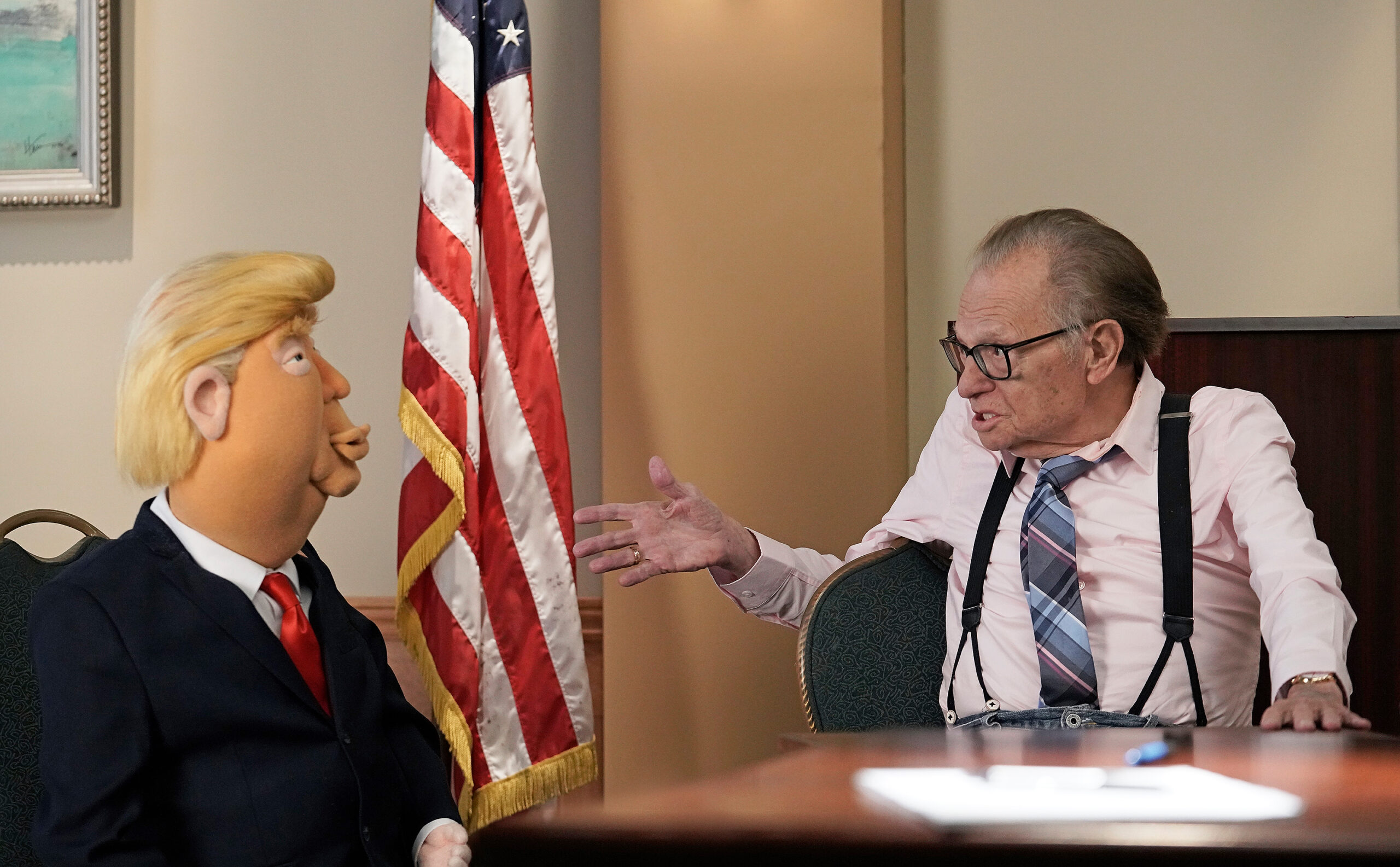 Larry King, shown in a 2020 show with a Donald Trump puppet, continued to interview people well past his departure from CNN. (Fox via Getty Images via JTA.org)

King in 2003 told the Los Angeles Jewish Journal that he grew up in a home where Jewish laws were observed — he said with some pride that he did his entire bar mitzvah in Hebrew — but that he began to grow disillusioned with faith after his beloved father died when he was 10.

King’s personal politics were liberal as a result of the welfare payments that saved his family after his father’s death, he said.

Seeking radio work in his 20s, a mentor advised King to move to Miami, where there was a burgeoning market. (At 22, he asked a Roman Catholic priest how many children he had, he recalled in a profile in 2003 in Lifestyles, a Jewish magazine. “The look on his face is something I still see in my nightmares,” he said at the time.)

King became a popular radio presence in Miami but also indulged a damaging gambling habit. His career took a dive in 1971 when he got involved with Louis Wolfson, a wealthy Jewish industrialist tainted by a stock market scandal and the bribery case that drove Jewish Justice Abe Fortas off the Supreme Court.

The charges were dismissed but King’s career was over, or so it seemed. Within a couple of years, he was back at work in Miami. In 1978, he was asked to take over a midnight to 5:30 am syndicated talk show.

He honed his modus operandi on the show: a long, friendly interview with a celebrity or politician, followed by questions from callers. Ted Turner, CNN’s founder, asked King to move the format to live TV in 1985. King continued to broadcast his talk show after his 2010 departure from CNN, for a time on the English service of RT, the Russian broadcaster, and online.

He also had a regular column in USA Today for 20 years, a collection of unrelated thoughts separated by ellipses. The column’s randomized style was much mocked — The Onion ran a parody headlined “I am f***ing insane” — but King may have been prophetic. He revived the style for Twitter, where he created the hashtag #ItsMy2Cents and accrued millions of followers.

King was married eight times to seven women. He married Alene Akins, a former Playboy bunny, twice in the 1960s. His longest marriage was to Shawn Southwick, whom he married in 1997 and was 26 years his junior. At the time of his death, the couple were undergoing divorce proceedings, reportedly because King said they could not overcome their difference in age and religion. Southwick is a Mormon who sometimes brought King to services.

King called himself an agnostic but fund-raised for Jewish charities. In 2016, he auctioned off a signed pair of his red suspenders for the American Jewish Historical Society.

As bland as he sometimes appeared to be on TV, in private King was known as a profane raconteur, telling stories of unlikely sexual conquests. He was also known to describe an adventure as a kid that he had with Jewish baseball great Sandy Koufax that never occurred. Koufax said he did not meet King until they were adults, according to King’s obituary in The Washington Post.

King never lost his sense of wonder at his success.

“Larry Zeiger is still in there — he is Larry King on the outside,” he told the Los Angeles Jewish Journal in 2003. “But every day I feel amazed.”

Bantering with Jerry Seinfeld in 1991 about how Seinfeld’s eponymous show had become a hit, King said of making a living by making people laugh: “It’s like getting paid to interview somebody, crazy.”

King is survived by three children, one from a brief marriage in 1961, and two whom he had with Southwick. The two children he had with Akins — one he adopted from her previous marriage, and one he had with her — predeceased him last year.