A Delaware rabbi blessed President-elect Joe Biden and his wife, Jill, before they left the state Tuesday to assume the presidency by citing this week’s Torah portion describing the Israelites’ flight from Egypt.

Rabbi Michael Beals explained at the farewell ceremony in New Castle the meaning of “bashert,” the Yiddish term for destiny often used to describe a married couple. He applied it to the Bidens, who were on hand at the event at a National Guard center named for Joe Biden’s late son Beau, but also said Biden was bashert for the presidency.

“It is indeed bashert that you, our dear president-elect, are being inaugurated on the very week that Jews around the world are reading from the book of Exodus, about Moses’s freeing us from 400 years of backbreaking Egyptian slavery at the hands of an autocratic cruel Pharaoh,” Beals said. “In many ways, dear Joe, you are our Moses.”

This week’s Torah reading, or parsha, is Bo, describing Pharaoh ordering the Israelites to leave after the 10th plague — the death of the firstborn.

Beals has become a spearhead of Biden’s Jewish outreach, often describing at campaign events his first meeting with Biden, who turned up at the shiva of woman who had donated $18 to every one of his election campaigns. 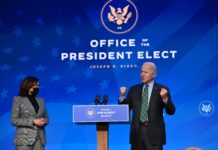