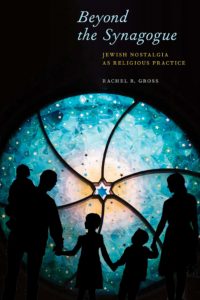 “Beyond the Synagogue: Jewish Nostalgia as Religious Practice”
Rachel B. Gross
NYU Press

Rachel B. Gross, a professor of Jewish studies at San Francisco State University, is willing to bet that you don’t see your purchase of a scarf from the National Museum of American Jewish History gift shop as religious practice. Ditto for a kosher-style pastrami sandwich scarfed down at Hymie’s, an afternoon spent on a Jewish genealogical website or a historical tour of Congregation Mikveh Israel.

These activities, as we typically understand them, are Jewish cultural practices, distinct from religious practices that take place in synagogues or around the Shabbos dinner table. They are expressions of nostalgia, in many cases, rather than spiritual exercises.

But Gross argues in her provocative new book that this distinction between “religious” and “cultural” is false. The widely shared experience of American Jewish nostalgia is, she says, the expression of understanding between Jews living and dead, i.e., religion, and create networks of sacred meaning. To view nostalgia as merely “a wishful affection or sentimental longing for an irrevocable past,” Gross writes, is a mistake. It is in a Hymie’s booth, she argues, digging into that pastrami sandwich, where American Jews practice religion today.

Jewish communal leaders, philanthropists and academics have sounded the alarm at the decline of traditional religious practice, Gross says, giving rise to a fundraising structure that privileges “Jewish continuity” above nearly all else. “But if we reorient where we look for American Jewish religion and reconsider how we define it,” she writes, “then we start to find a lot more of it.”

Gross uses the framework of “lived religion,” expanding the definition of religious activity beyond what “official” religion allows. Rather than accepting religion as prescriptively defined by official texts and dictates of traditional institutions, Gross uses a descriptive approach that “helps us to take seriously the structures, commitments, and activities that shape everyday life,” she writes.

Gross’ assessment of the way institutional Judaism dismisses activities that aren’t officially Jewish is well-argued and comprehensive, and her claim that this is partially due to an understanding of nostalgia as feminine and therefore unserious deserves greater study. But it’s difficult to accept her larger argument.

I write for a Jewish newspaper, and read about Judaism and Jewish people more than any other subject, but I don’t understand that to be religious. Likewise, it makes me feel a bit sad to consider that a preference for bagels and ancestry.com could constitute a connection to the infinite.

If powerful sectors of institutional Judaism are not properly valuing cultural practice, as Gross charges, it makes sense to argue for the intrinsic value of such practices rather than argue that they should be recategorized as religious. Non-religious connections to Judaism should be encouraged and nurtured, but we don’t need to radically reorient our communal understanding of those connections in order to see their worth.

Whether you buy the larger argument, Gross’ book challenges prevailing orthodoxies of American Jewish life with respect and purpose. 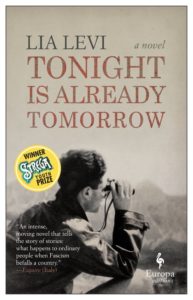 “Tonight is Already Tomorrow” is a translated work published by Europa Editions written by a prominent Italian novelist about a mid-century child prodigy. If that sounds a bit like one of Elena Ferrante’s Neapolitan novels, I’ll admit that my interest in Ferrante led me to this new Europa novel by Lia Levi.

But unlike Ferrante’s popular books, Levi’s “Tonight is Already Tomorrow” is kind of a drag.

The writer’s powers of description are impeccable, even in translation, and her sense of the dramatic is on full display in her tale of a Genoan Jewish family caught up in the gears of Italy’s fascist turn. But confusion reigns in this short novel, which introduces characters and plot lines that are quickly dropped, as if Levi, overflowing with ideas, had trouble deciding which to include. In trying to take a bite out of every cake, “Tonight is Already Tomorrow” ends up without a distinctive flavor.

At times, Levi appears most interested in the character of Alessandro, the brilliant little boy set to change the fortunes of the Jewish Rimon family. In the chapters about him, you can see the outline of an interesting book, with grand machinations of history and familial strife seen through the eyes of a precocious little boy. But Levi finds so many other characters to inhabit that we don’t spend as much time with Alessandro as we’d like. In such a short book, far too much real estate is occupied by far-flung cousins and other minor characters.

There are ideas for five interesting novels in “Tonight is Already Tomorrow.” Unfortunately, Levi didn’t end up with one.