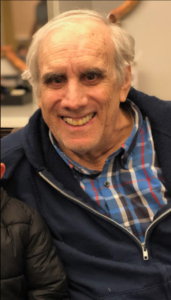 Whether he was leading services as a cantor, commentating on his sports radio show or instructing students as a substitute teacher, he had a passion for entertaining an audience.
“Dad was definitely a showman his whole life,” daughter Erica Rovinsky said.

Born in Philadelphia to Mildred and Gerald Wechsler, Roger Wechsler was an eldest child with two younger brothers, Peter and Scott. The family later moved to Dresher and joined Temple Sinai, where he was a member and served as a backup cantor for many years. As an adult, he served as president of the Men’s Club and captain of the softball team.

He graduated from Central High School and earned his undergraduate degree in business from Temple University. After college, he went into business with his brothers at their vending machine company Vendrite. His children have fond memories of him using his master key to pop open machines and provide unlimited snack access.

Wechsler was passionate about Judaism and became a cantor at Temple Beth Ami. Rovinsky said he took up the position in 2000 when his friend’s son was having his bar mitzvah and the cantor fell ill. The friend knew it was something that Wechsler would love to do, so he asked him to fill in for the event.

The family and staff were so happy with his performance they asked him to stay and fill in until the other cantor returned. He planned to act in a temporary capacity, but his predecessor never recovered enough to resume his full duties, so he remained with the congregation and became a regular cantor, leading services on Fridays and Saturdays.

He and his wife, Robin, raised their children as Conservative Jews. He also regularly led holiday celebrations at relatives’ houses or a country club.

“We had some legendary Passover seders with him leading services upwards of maybe 50 people,” son Jeffrey Wechsler said.

He was an avid Philadelphia sports fan, and the family had two television sets so they could watch games simultaneously if the Flyers were playing at the same time as the Phillies or Eagles.
He hosted the sports talk radio show “Sports Monday With Roger Wechsler” and served as the sports director at WBCB radio station in Fairless Hills for many years.

“He got a chance to sort of live every sports fan’s dream in that he could host his own radio show and, you know, complain about the Phillies and Eagles as much as he wanted to,” Jeffrey Wechsler said.

He passed his love of sports down to his children, who were both athletes in high school and college. Jeffrey Wechsler took it a step further and pursued a career in sports production, earning three Emmy awards.

“My dad was so super proud of that. If my dad could have worn the Emmy around his neck, he would have,” Rovinsky said.
Jeffrey Wechsler previously worked at ESPN and is now a sports producer at NBC Sports Philadelphia.

“He was pretty happy with that,” he said. “It was a lot of fun when he got to work with me and I could show him around ESPN and Sports Philadelphia.”

Later, Roger Wechsler left the world of business to become a substitute teacher, and taught in schools in the Philadelphia area for 10 years. Jeffrey Wechsler said he started teaching as a favor to a friend, but began to enjoy being in school, getting to know the students and joking around with them.

He said his father struggled with diabetes in his later years, but was always an energetic grandfather to his two children.
“The last couple of years were really tough, physically, for him. Especially this last, since COVID was really hard,” he said. “But you’d never really know when we FaceTimed. He was just himself, full of energy and love and making the kids laugh.”