“To Be a Man: Stories”
Nicole Krauss
Harper 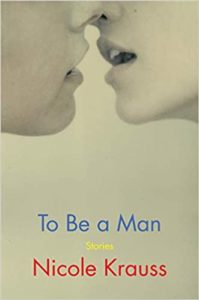 In nine of the 10 stories that make up Nicole Krauss’ first collection of short stories, “To Be a Man,” the protagonist or another prominently featured character has an advanced degree of some kind.

In the only story that doesn’t settle this question one way or the other, “Amour,” the narrator’s love interest yearns for life with her old boyfriend, Ezra, who would take her to the Film Forum to see Pasolini and Fellini movies. The existence of a Ph.D. is not directly addressed in that story but the characters in these stories, published in the last 18 years, live in a blur of endowed chairs and second homes, and own their apartments in New York, Tel Aviv or both. They take solo vacations to Kyoto and have opinions on opera and work for architects.

There’s nothing wrong with writing about a small milieu; the function of fiction, after all, is to suggest universality through interrogation of the particular, whether that particular is middle- to upper-class or more down-to-earth, as in Roth’s Weequahic or Ferrante’s Naples.

But what hinders Krauss’ stories is that her characters are often residents of the same emotional neighborhood.

Slowly encroaching calamity, represented with fire (plus doomed relationships) in “End Days” and with an unexplained toxic event (plus a doomed relationship) in “Future Emergencies” is met in both cases with characters who, despite frantic internal conflict, do nothing.

The narrators of “In the Garden,” “Switzerland” and “Amour” begin their stories with variants of, “Let me tell you about a thing that happened to me decades ago that I was recently reminded of, and that still looms large in my self-conception.”

Everyone who is Jewish wears it awkwardly, like trying to shrug on a tallit that won’t quite stay on the shoulders.

To read these stories can sometimes feel like watching a one-woman show — the characters are numerous, but you can see it’s the same person.
The stories that more directly concern the title premise are more successful.

Fathers or father-figures loom large in the lives of their daughters in “Zusya on the Roof,” “I Am Asleep but My Heart Is Awake,” “End Days,” “To Be a Man” and “Seeing Ershadi.” In these stories, as well as “Switzerland,” the complex mix of loneliness, fear, sex, violence, weakness and submission that some writers call “love” is most thoughtfully considered.

In “To Be a Man,” what the fathers or father-figures did to socialize themselves into daughter-raisers is a mystery to those daughters, who are usually mistreated by their romantic partners. How does a man doing this to me become a man who loves his daughters? The women learn that men are capable both of great violence and tenderness, and that the two impulses live within them always. The men in the life of the narrator — the German boxer lover, who is “pure wolf” in bed; her IDF enlistee brother, who is taught to numb himself to his pain and that of others; a male friend, who recalls his adolescent violence — all stood where her teenage son stands now, “out on a bank between the shore and a sea that goes on and on.” All the narrator can hope for is that he’ll keep an eye on the shore as the waters continue to rise.

Krauss’ writing is phenomenal, and to read her stories, even those that don’t quite succeed, is to treat yourself to bite after bite of an exceedingly rich cake. I’ll look forward to her next novel.