‘“My dad is a physician, Dr. Ted Tapper, and my mom is a nurse. So, finally they have a doctor for a son, if not a medical doctor,” he said.
Tapper headlined Gratz 125, the Jewish education institution’s virtual 125th anniversary celebration on Dec. 6. Gratz President Paul Finkelman interviewed him about his career, his upbringing in Philadelphia, his Jewish education and his take on current issues in journalism and politics.

“In confirming this honorary degree, Gratz recognizes Jake’s significant contributions as a journalist, author and public intellectual. Throughout his career, he has demonstrated the courage, intellectual power and dedication to truth and objectivity that are the hallmarks of great journalism,” Finkelman said.

Finkelman also noted that he could not have predicted the event that would take place just a few days before Gratz’s anniversary event. On Dec. 3, Tapper, anchor of the weekday program The Lead with Jake Tapper and host of the Sunday morning show State of the Union, became the first reporter to simultaneously interview both President-elect Joe Biden and Vice President-elect Kamala Harris since the 2020 presidential election.

“I thank you Jake for scoring this incredible journalistic coup, right before we gave you an honorary degree. We couldn’t have asked for so much,” Finkelman said. “It was a fair, tough and important interview.”

He later asked Tapper if there were any questions he did not get to ask during the 40-minute interview. Tapper said he hoped he would have a chance to ask the Biden administration about the Abraham Accords, and whether the Trump administration’s success at helping negotiate treaties between Israel and the United Arab Emirates and Bahrain would cause Biden to rethink conventional ideas about peace in the Middle East.

Finkelman asked Tapper to talk about how his experience attending school at Akiba Hebrew Academy — now Jack M. Barrack Hebrew Academy — shaped his life and career. He responded that his time at the school, particularly his study of the Talmud, instilled in him a respect for people of all faiths and backgrounds as well as an appreciation for open debate.

“You really learn to value the idea of debate and discussion in a way that is very helpful for anybody in this world, but certainly helpful for anyone who goes into journalism,” he said.

Tapper also praised Gratz’s commitment to inclusion, noting its nondenominational approach and its decision to have men and women study together from the outset, a forward-thinking concept for the late 19th and early 20th century.

Tapper and Finkelman also discussed the concept of partisan media and the challenges of covering politics in a highly polarized environment.

Finkelman disclosed that he had received hate mail from people on the right after announcing Tapper would receive an honorary degree. He reported receiving similar vitriol in 2018 from people on the left when he gave the same honor to lawyer Alan Dershowitz.

Tapper said that he did not take political positions in his news coverage and received plenty of hate mail himself for being critical of President Barack Obama’s administration. However, he said he did take a strong stance in favor of facts and decency.

Tapper said that he was excited that his home city played a decisive role in the presidential election.

“I liked it just because I like anything that has to do with Philadelphia, so having Philly play a role in it was exciting to me personally, no matter who ended up winning the election. I was seven when the bicentennial happened, so I really think of Philly as the birthplace of democracy in America,” he said.

Gratz also presented honorary master’s degrees in Jewish studies to Regina Horden and the late Martin Horden, who both completed the equivalent of master’s degrees in courses as non-matriculating students. Jewish educator Sora Landes, the late Lois and Martin Bachman and Congregation Mikveh Israel received Gratz Medals for their contributions to the college. 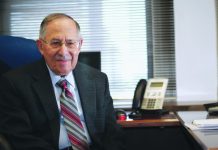 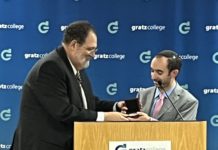