What keeps a group of friends together for 50 years?

For Philadelphia’s Unstructured Synagogue Havurah, the answer is simple.

“The one word that it can be boiled to is acceptance. We accept one another. For all the mishegas that individuals have, we accept each other,” said Rabbi Steve Stroiman, the group’s facilitator.

On Nov. 4, 10 members convened on Zoom to commemorate the group’s 50th anniversary and reflect on the role it has played in their lives.

The group, which has no dues, no building, no officers and no rabbi, consists of members from across the Philadelphia area. Its overall religious affiliation is somewhere in the middle of the spectrum, between Reform and Orthodox, with a Reconstructionist influence. Meetings take place two or three times a month and consist of services and discussions.

The venture started with 24 individuals in six core families. They met in each other’s houses to pray, study and socialize, going on camping trips and holding holiday services together. They took walking tours of Jewish Philadelphia and visited Jewish sites in New York and Washington, D.C.

“We are not a davening group, per se. Yes, we do have services, but they are part of the whole picture, and the whole picture consists of study, worship and celebration,” said Stroiman, who joined when he was a young rabbinical student two months after the initial founding.

“I don’t flourish in congregational Judaism for a couple of different reasons,” said member Marvin Kreithen, who joined the group with his wife Leslie Kreithen 10 years ago. “First of all, synagogue is a monologue. The rabbi gets up there and talks. What I like about the Havurah is it’s a dialogue: everybody you’re looking at has their own opinion on things, and it’s good to share all that.”

Leslie Kreithen was drawn to the opportunities for study and intimate discussions.

“Even though we belong to a synagogue, the holidays that we celebrated together were on a more personal level, talking about our own life experiences, thinking about what the years have been, remembering people on Yom Kippur who have died,” she said.
Member Marian Cohen joined the chavurah five years after it was founded. She appreciated the group’s creative approach to Judaism.

“We had the freedom to express ourselves in individual ways,” she said. “Sometimes we agreed with each other, sometimes we didn’t, but overall it was a positive learning experience and we became sort of a family.”

“One of the things I will always remember, and so will my children, is we all pitched in and made flying menorahs out of straws, candles and plastic bags from the dry cleaners. We did it outside, we were very careful, and if we did it right they went up in the air, and it was absolutely incredible,” she said.

This year, activities have ranged from personal reflections during the High Holidays to a talk from the Jewish Genealogical and Archival Society of Greater Philadelphia to a presentation about the Mussar movement.

Stroiman said the group kept its size deliberately small in order to comfortably fit in people’s living rooms. Over the years, moves and deaths have chipped away at the original number, and the group now has about 14 members.

During the coronavirus pandemic, Zoom has allowed members’ homes to continue to be the main site of the chavurah’s activities, albeit virtually.

It was challenging for the members, whose average age hovers around 80, to learn the new technology. At 75, Stroiman is among the younger members, but he still had to get out of his comfort zone to moderate the Zoom sessions and find materials for group discussions online. However, they ultimately adapted.

Over the past 50 years, the members have come to regard each other as extended family. Their children, though grown, will still come back to visit and attend the occasional event.

Like most families who spend decades in each other’s company, disagreements among members are inevitable. Maintaining cohesion in the polarized political environment of the past four years has been difficult, but the group made a collective decision to prioritize their relationships over the news (no political discussions allowed.)

Member Luci Stroiman said the group has learned that disagreements do not necessarily equate disunity, as long as everyone respects each other.

“We listen to each other. That’s the key, we really do listen to each other,” she said.
Members have learned to adapt to each other’s needs, from learning how to cook kosher vegetarian dishes to accommodate dietary restrictions to finding an accessible tashlich site for aging members. They have also acted as a support network for each other through all of life’s milestones.

Member Evelyn Goldberg, who joined the chavurah 40 years ago, said the group encouraged her creativity and boosted her self-confidence. She was bolstered by members’ support when she decided to go to nursing school in her mid-30s.

“They were so supportive of me, and several people even came to the graduation,” she said. “I could actually feel it, spiritually and physically, that they were on my side and that they were helping me.” 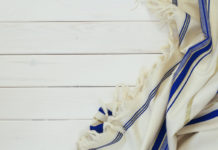 Tug at My Tallis