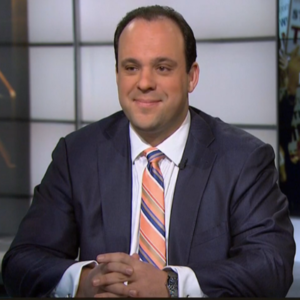 The Congregations of Shaare Shamayim held its traditional presidential town hall via Zoom this year, splitting sessions with Sen. Ben Cardin, a long-serving Democrat from Maryland, and Boris Epshteyn, a Republican strategist and former White House official, into two nights.

Each spoke on behalf of their party’s presidential candidate before submitting to Q&A sessions moderated by Linda Kobrin, the synagogue’s executive vice president, and congregant Rhona Sloan.

Cardin and Epshteyn, both nationally known figures, were the latest high-profile representatives to speak at the synagogue’s town halls; Sen. Joe Lieberman and former White House Press Secretary Ari Fleischer have appeared in the past.

Cardin, who spoke on Oct. 22, was able to be seen on his camera, and wore a suit as he answered questions with long, winding answers from a desk; Epshteyn, his voice scratchy and hoarse from speaking at a series of rallies in the days prior to his Oct. 26 appearance, was not able to appear on camera, and answered the questions he was given in rapid succession, spending about half of the time that Cardin did at the town hall.

Cardin spoke and answered questions for 45 minutes, imploring viewers to vote and warning that President Donald Trump had signaled a willingness to challenge election results.

“I come to the Jewish community, and can say very clearly, that Joe Biden will continue to ensure the unbreakable support in the United States for the Jewish state, for the Jewish people and for Jewish values,” Cardin said. “All are under challenge today.”

Cardin spoke for about 20 minutes before answering questions passed along by Kobrin.
Preempting questions that would pop up during the Q&A, Cardin made the case for Biden as a defender of Israel, pointing to the nearly $40 billion in military aid pledged to Israel by the Obama administration in 2016. He half-defended the Iran deal; having voted against it, Cardin still disagreed with the president’s decision to withdraw. Cardin decried Trump’s comments following the Charlottesville, Virginia, rally of 2017 (though Epshteyn would dispute the common characterization of those comments in his own session.) He downplayed the power of the “Squad” within the Democratic Party, and assured viewers that Biden was not a socialist.

COVID-19 lingered at the edge of a few questions, but for the most part, it was absent.
Four days later, Epshteyn, a Soviet immigrant who was the chief political commentator at Sinclair Broadcast Group until last December, joined congregants and viewers for about 25 minutes, splitting his time evenly between his opening address and the Q&A.

Trump, he said, is rivaled only by President Harry Truman in the support he’s offered to the state of Israel. Going down the line, Epshteyn named the numerous peace deals of the last few months that the U.S. has brokered between Israel and historically antagonistic countries, as well as the killing of Qasem Soleimani and the new U.S. Embassy in Jerusalem, as signature accomplishments of the administration.

Trump “has fought and combated anti-Semitism anywhere and everywhere,” he said, adding that Biden and Sen. Kamala Harris belong to the party of Linda Sarsour and have met with Jacob Blake Sr., “an avowed and rabid anti-Semite” (Blake’s son, Jacob Blake, was killed by police in Kenosha, Wisconsin, setting off protests and riots; the elder Blake was later found to have made anti-Semitic Facebook posts). After about 10 minutes, Epshteyn fielded questions from Sloan, answering queries about Charlottesville, the border wall, masks, protecting preexisting conditions and Vladimir Putin as rapidly as they came in.

Though synagogue president Jacques Lurie said that there was some apprehension about the possibility of disruption, the precautions that were taken allowed each night go off without a hitch. The questions from attendees were often pointed, but rancor and name-calling were absent from the decidedly low-key affairs.

“You know, we have really gotten very good at organizing this and keeping people respectful,” Lurie said. “So I really wasn’t worried about that.” 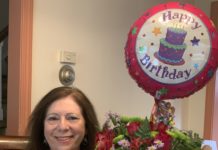 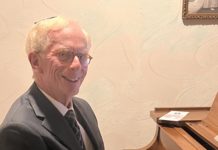