The move comes less than two weeks ahead of the American election and amid official warnings of potential violence by extremist groups during and after the vote. It also comes following complaints that TikTok users were demeaning the Holocaust by portraying themselves as concentration camp inmates in videos.

TikTok said in a blog post Wednesday that it already bans Holocaust denial and works to remove neo-Nazi and white supremacist content. Now it will remove posts advocating similar ideologies like white nationalism, male supremacy and “white genocide theory,” which falsely claims that there is a conspiracy to eliminate white populations with a flood of immigrants.

In recent weeks, Facebook, Twitter and YouTube have all announced steps to ban Holocaust denial, hate groups and posts advocating QAnon, a growing conspiracy theory with anti-Semitic overtones. The measures come following campaigns by activists charging that the platforms were not doing enough to combat hate. 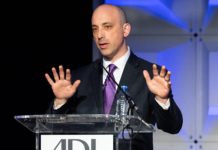