Not everyone looks into their backyard and sees the spot where they’ll be married. And perhaps fewer still see an empty synagogue as the setting for the day that they became a Jewish adult in the eyes of the community.

In the midst of a pandemic, some Jews across Philadelphia are finding that a simcha venue might just be wherever you happen to stand. Others, though they may squint, still can’t quite see the site of their future memories, and have chosen to postpone their milestones for a few months, if not indefinitely. Choosing any trail is a difficult call for those who have been forced to do so.

“We made the best of it,” said Mia Blitstein, whose son, Judah, elected to postpone his planned May bar mitzvah until 2021. “There’s no other option at this point.”

The Blitstein family belongs to Congregation Adath Jeshurun in Elkins Park, where Judah has readied himself for a lifetime of Torah reading since fifth grade. As the big day approached, so did the virus; invitations to the May bar mitzvah went out on March 16 with a note attached to let potential attendees know that the Blitstein family was indeed aware that a burgeoning global pandemic might necessitate a postponement.

Judah and his parents assessed their options. He could keep his date, keep his parshah that he’d worked hard to learn and deliver the goods via Zoom; he could lose both, but potentially have an in-person celebration if he postponed until the fall; he could keep the parshah, but read it in 2021, to give himself an even better chance to have his friends and family
around him.

Judah chose Door No. 3. A new DJ was contracted, and the food is taken care of, but with a vaccine still more concept than reality, his mother isn’t holding her breath.

“I have really put it on the back burner,” Blitstein said, “because we have no idea what it’s going to look like.”

Down the road in Dresher, Debbie Dall got the date for her son Zach’s bar mitzvah three years ago: May 9, 2020.

“When COVID started happening in March, I figured by May, we would be OK,” Dall said. “Little did I know.”

Her family has been a part of Temple Sinai for generations, and Dall was determined to find a way for her son to join the community of Jewish adults within its walls. Adaptations were necessary; a list of 110 of Zach’s friends who were to be invited to his bar mitzvah was whittled to four, Zach had to learn a new parshah for the new August date and the 40 total attendees that did make it to the synagogue signed waivers, wore masks and were spread out among 400 seats in the sanctuary.

Afterward, some who had attended the service and others who had not were welcomed to the Dall backyard with Zach-branded masks, hand sanitizer and food trucks. It wasn’t the original plan, but in the end, Zach became a bar mitzvah.

“He didn’t want to tell his children that that’s how he got bar mitzvah’ed, through a computer,” Dall said.

On the other side of the river, Shari Morelli and her daughter, Sadie, are preparing for an Oct. 24 bat mitzvah, right in their Wynnewood backyard, to be led by Main Line Reform Temple Senior Rabbi David Straus. Over the summer, Morelli and Sadie decided that a small ceremony, attended by family and their closest friends, would be preferable to waiting a year. Now, they’ll have small, distanced tables of masked friends and family celebrating with them, while their cantor Zooms in.

“I feel like you just don’t know what tomorrow is gonna bring,” Morelli said. “And I really felt like we should embrace it now and just take what we’re given.”

Two stops down the Paoli/Thorndale Line in Merion Station, Jamie Sweet, an infection control nurse at Einstein Medical Center in Philadelphia, spent the summer trying to figure out how she might safely marry her fiance. May 24, the original date, had come and gone, and though they were fortunate that their vendors were accommodating, there was still the problem of getting married.

Get married, they did. With personalized masks to mark the Sept. 13 occasion, a small group of family and friends gathered for a ceremony, cake, drinks, a quick first dance and a catered dinner for an even smaller group.

“There were a lot of tough discussions with our parents,” Sweet said. “In the end, everybody was happy with the decision we made.”

Mikki Rosenberg was similarly content with his experience. He proposed to his now-wife Hannah on Thanksgiving 2019, and plans were made for June.
“My in-laws are amazing, and I’m pretty sure she likes my parents,” he joked. All was going smoothly — until it wasn’t.

The grand plan was to have the wedding in Baltimore, halfway-ish between his family in Philadelphia and her family in Rockville, Maryland. The grand plan was grandly dashed and, in the end, Rosenberg found himself married a few months later than he thought, danced around his father-in-law’s study by his brothers.

“From the moment it started, it was awesome. It was honestly the best one I could have had,” Rosenberg said. “It was just so nice and so pleasant, and everyone was there was so appreciative of being there. And we were careful, but also just had a lot of fun.” 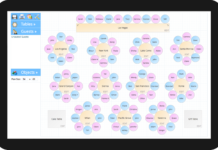 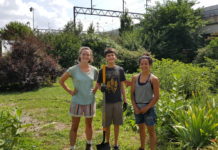 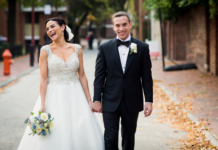