Ran Betite and Yael Cooperman’s first year in Philadelphia was full of surprises.

The couple moved to Queen Village from Tel Aviv in September of 2019. Cooperman planned to take a medical residency and Betite wanted to continue his mechanical engineering career. The couple was also planning for the birth of their second child and wanted to be near Cooperman’s parents in Maryland.

The coronavirus pandemic didn’t stop baby Rafael from arriving in April, but the crisis stalled most other aspects of the family’s life, including Cooperman’s medical licensing exam and Betite’s green card hearing. Cooperman took a job writing content for a health care company while waiting for her exam to be rescheduled, and her husband turned to a popular quarantine pastime: baking sourdough.

Betite was not a total breadmaking novice; he had made bread for friends in college and once took a baking class while on vacation in Paris. In Philadelphia, he began making sourdough for his family.

“We really couldn’t find bread we were looking for in the neighborhood. So, I just started to make the bread we eat,” he said. “If you’re already eating bread, why don’t you make it the best bread you can find?”

Betite’s sourdough is made from whole wheat flour, spelt, rye and other grains, which makes it more nutritious than typical white bread. Once the pandemic hit, he spent his extra time watching baking videos on YouTube to hone his craft.

He was baking so much and so often the couple started giving away his loaves on the Buy Nothing Project, a Facebook group for neighbors looking to exchange groceries, furniture and more.

“All of a sudden, people sort of reached out and were like, ‘Oh, my God, can we get some of this please?’” Cooperman said.
This fall, the couple launched the bakery pop-up Metuka Freshly Baked. Metuka, which means “sweetie” in Hebrew, was also the given name of a long-deceased woman who lived in the couple’s Tel Aviv apartment before they rented it. During an intensive renovation process, they discovered photographs and documents with information about her life.

Betite bakes around 120 loaves per day in a commercial kitchen on North Broad Street, where he rents space. The kitchen features a steam oven designed for baking sourdough.
The project has been an opportunity for the couple to connect with Philadelphia, particularly the Jewish community, at a time when opportunities to meet new people in person are limited. Betite and Cooperman sell bread, babka, muffins and other baked goods at local farmers markets and online, where they get to chat with customers. They are searching for retail space in Queen Village to expand further.

It took Betite a while to get his challah recipe right, but he managed to perfect it before the High Holidays after tasting his in-laws’ loaf. The morning before Yom Kippur, the couple set up shop outside Cohen & Co. Hardware and Home Goods on Passyunk Avenue.

“That’s when we really got a chance to connect with Jewish members of the community because it was Rosh Hashanah, and so everybody was super excited about getting a challah. And that’s when we really got to connect with people. We got a million messages, people wishing us a happy new year, and it was really nice to sort of get connected with people that way,” Cooperman said.

“It comes from an Arabic kitchen, which is part of my culture,” he said. “I try to bring some of my culture into the things that I do and into the kitchen — things that are not necessarily an American staple — because I feel like that’s showing my identity in the food that I make.”

Although Betite and Cooperman are not religious, maintaining a connection to Judaism after leaving Israel was important to them. They attended events at Society Hill Synagogue, South Philadelphia Shtiebel and Chabad before the pandemic.
To Cooperman, the feeling of preparing for Shabbat was especially important.

“When you’re in Tel Aviv, when you’re in Israel in general on Fridays, everything shuts down and people are all getting ready for Shabbat, and there’s like this sort of last-minute rush to get everything in place so you can go your family’s house for dinner, and people run out and buy challah, flowers and whatever they need. There’s a feeling in the air,” she said.
Betite said the community has helped his family feel settled in their new home while also supporting his baking ventures.

“I feel a lot of love from Jewish community in Philadelphia, and I want to say thank you. It’s a beautiful thing” he said. 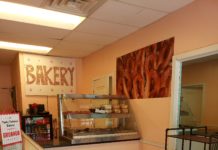 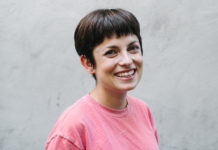