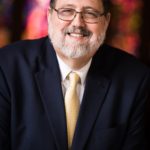 Sussman was recognized for “exceptional leadership, dedication, and outstanding contributions to advocating for and promoting the fields of Holocaust studies and education, which advance the values and mission of HAMEC,” which recently relocated to KI’s Elkins Park campus.

During his keynote address, Sussman detailed the story of his mother’s family’s escape from Nazi Germany. The Sacki family left the Bavarian city of Bamberg in 1938-’39, initially resettling in New York City and Baltimore.

Sussman is chair of the board of governors at Gratz College, an honorary trustee at Delaware Valley University and is working on a television documentary about the history of the Philadelphia Jewish community.

Stockton U. Endows Holocaust Scholarship in Honor of Survivor Couple
Stockton University announced the creation of the Jadzia and David Greenbaum Memorial Scholarship for students interested in Holocaust and genocide studies.

Ann and Howard Rosenberg of Toledo, Ohio, endowed the $25,000 scholarship fund to honor her Polish parents, who survived concentration camps and met in a displaced person’s camp in Germany after World War II.

They immigrated to the United States, first buying a chicken farm in McKee City, New Jersey. In 1978, they built a construction business and moved to Margate, New Jersey.

The first scholarship will be awarded in the 2021-’22 academic year. It will be open to undergraduate and graduate students with a demonstrated interest in Holocaust and genocide studies, who are in good academic standing with a GPA of at least 3.0.

Ann Rosenberg said she and her husband are planning a second scholarship for Stockton students from Atlantic City in memory of Howard Rosenberg’s parents, who owned a grocery store in the city.

Pollack, who grew up in Northeast Philadelphia and now lives in Woxall, is a volunteer with the One Book One Jewish Community program and a singer with Nashirah: Jewish Chorale of Greater Philadelphia and the Tiferet Bet Israel choir.

He retired in 2009 as the supervisor of planning and operations for the Souderton Area School District.