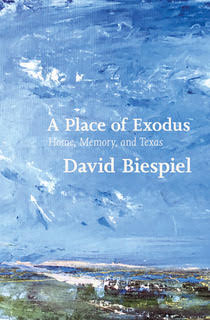 David Biespiel, critic and poet, uses that quote early in “A Place of Exodus,” his memoir of Jewish childhood and adolescence in Meyerland, Texas. The rest of the book is a demonstration that he really knows what it means.

In Meyerland, an old Jewish neighborhood in Houston, Biespiel receives a birthright befitting the son of “shul people”: an abiding awe of God, all of the Jewish books devoted to interpreting and praising Him, and a belief in the inexhaustible worthiness of those books. Less explicitly given over are the stories of the people around him.

As his birthright begins to burden him, it’s the intermingling of his life with the stories he’s been told and taken part in that constantly reconstitute him. People once told Biespiel, a star student at Beth Yeshurun Day School, that he could be a rabbi when he grew up; considering the possibility, he saw it as a life of “enduring myths.” Instead, he became a writer.

As a child, he had come to understand that being Jewish and being Texan might be one and the same. “Chanting Hebrew prayers inside the magnetism of Texas lore was my open range of obligation, my 254 counties of faith, my Book of Third and Long,” he writes. “Dots and dashes slashing across the siddur, the Jewish prayer book, were my hominy and grits, my leaves of trees budding in February, my hot bowls of chili, my Davy Crockett at the Alamo.” It’s warm love, all the way down, from the way he describes the shape of Hebrew letters to the awesome power of Earl Campbell’s thighs. Even the cover, painted by Biespiel, expresses this love.

And why shouldn’t he feel that way? Everyone he loves is Jewish — and vice versa; Jewish books and Jewish education are what matters to his family. All of it takes places beneath the “bright, massive skies” of Texas, a place that Biespiel still longs for decades after moving away.

What animates the beauty and mystery of one seems to animate the other; at the conclusion of a tenderly recounted seder in 1974, as the cry for Jerusalem goes up, you can’t help but feel that another year in Meyerland wouldn’t be so bad.

Biespiel does elide the fact that there are likely to be some liberties taken in reconstructing evenings like that, with long conversations recounted beat by beat. There’s even a misremembered Freddy Fender song title — he recalls hearing “Until the Last Teardrop Falls,” rather than “Before the Next Teardrop Falls.” But there’s poetry to that misremembrance! In a book so concerned with exploring memory, it would seem appropriate, even fruitful, to at least nod at that particular tension.

In any case, the problem of fusing Texas and Judaism is that doubts and fears about one element jump, spark-like, to the other. His father’s stroke strains the family, and as Biespiel lives the life of a precocious teen, he finds that he can no longer “focus on the bagel,” as his rabbi implores him to do; he cannot help but stare at the hole he sees in what he’s taught. “Am I the only one asking, why are we doing this?” Biespiel thinks, like any budding solipsist (or writer) should.

Biespiel and the rabbi don’t just bicker — they have “The Quarrel,” and on that fateful day, he walks out of the synagogue for the last time. Soon after, he walks out of Texas, not to return for 40 years, an exodus from Judaism itself. When he thinks of home, he sees it as “a distant horizon, staggering in and out of view.” He makes a brief return and, by the end of his journey, he’s even more confused than when he arrived. One day, it seems, you leave home and you never stop leaving. But home never leaves you.

I can only imagine that, when Biespiel writes, he points the desk toward Houston. 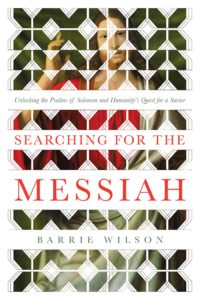 “Searching for the Messiah: Unlocking the Psalms of Solomon and Humanity’s Quest for a Savior”
Barrie Wilson
Pegasus Books

No passage of “Searching for the Messiah” better exemplifies this alternately illuminating and frustrating book better than a graphic presented by the author on page 148. Attempting to describe the complex web of requirements that one must meet to qualify as a messiah, the author provides a gray word bank with 25 different concepts like “New David” and “World Transformation.”

“These represent jumbled themes,” he explains.

There are a lot of interesting tidbits and a few big ideas in this new book by Barrie Wilson, professor emeritus of religious studies at York University. But the arguments he makes are oddly constructed.

His argument, as briefly as space allows: In the Gospel of Mark, Peter tells Jesus that he believes that he is the Christos — the messiah, in Greek. Aside from one other instance in Mark, Jesus does not confirm or deny this in any Christian text. And yet, Christians believe that Jesus was the messiah, and that his return will bring about the messianic age.
It’s not clear, Wilson argues, what exactly makes someone a messiah, or that Jesus even believed he was the messiah. To try and explain this, Wilson reads the Torah closely for mentions of messiahs, eventually settling on certain elements as vital for being an anointed leader (as opposed to a universal savior). However, these elements do not necessarily constitute the job description as Peter would have understood it at the time.

So Wilson consults a text that would have been widely disseminated around the time of Peter, “known today only to a handful of scholars.” “Psalms of Solomon” describe, in detail, what a messiah should be. Wilson applies this definition to Jesus, and supposes that if this was Peter’s working definition, than Jesus fell short of being the messiah; in fact, Wilson believes, this was probably part of Mark’s “created Jesus,” which retrofitted the historical Jesus with distorted myth.

Wilson then spends a few chapters talking about Woodrow Wilson, Hitler, “Paw Patrol” and the Avengers as examples of our persistent, misguided desire for messiahs, cultural and political. He finishes by arguing that the desire for a messiah distracts from the real work of personal transformation.

Wilson frequently speculates, and presents few counter-arguments to what he writes. No proof is provided for the idea that “Psalms of Solomon,” though uncanonized and certainly obscure to the general public, is only known to a few scholars. In a Los Angeles Review of Books review of Wilson’s past work, historian Anthony Le Donne noted that Wilson and his co-author had made a similar claim once before, having described a “lost gospel” that was, according to Le Donne, neither lost nor a gospel.

A key plank of the central argument — that Peter may have understood the messiah to be the one described by “Psalms of Solomon” — is not well-supported. And, truth be told, isn’t the salient fact about Jesus-as-messiah that billions of people have believed that he was one, rather than his failure to meet the definition laid out in a single apocryphal text?
Wilson strikes a kind, professorial tone. He’s passionate, fluent in biblical texts and occasionally funny. But his book leaves you with more questions than answers.

That’s not a bad thing, but they’re likely not the ones that Wilson intends to inspire.