Coronavirus cases are rising across the United States.

Several states in the South and West, including Texas, Florida and Arizona, have emerged as the nation’s new hotspots. Pennsylvania is also seeing a smaller spike in cases.

The new outbreaks threaten reopening timelines after weeks of progress. They also threaten the lives of the elderly and people with pre-existing conditions.

In our five-county region — Philadelphia, Montgomery, Chester, Delaware and Bucks — the death toll is at 3,930.

This week, we honor the memories of community members we’ve lost to COVID-19.

The World War II veteran helped build the old Liberty Bell Pavilion, which stood from 1976 to 2003, during his time at the Jack Casper bricklaying company. “The Today Show” aired a tribute to him on June 7, the 76th anniversary of D-Day.

He was born in Reading, attended Olney High School and enlisted in the Army in 1943. He was a broadcast member of Armed Forces Radio, and his family still has the glass records he used to entertain the troops.

He earned four citations, including the Asiatic Pacific Campaign Medal for his service in India and the Good Conduct Medal.

He was discharged in 1946 and graduated from Drexel University in 1949 with a degree in mechanical engineering. He joined — and later owned — the aforementioned bricklaying company.

“If my father did it, he did it with all his energy and all his commitment. In his company, he ends up president of the organization employing bricklayers. That’s the way he was,” son Howard Aronson said.

His “all the way” approach was also on full display in his personal life. When he decided he didn’t want to join an elite private country club, he founded the Beachcomber Swim Club for middle class families like his own.

When he wanted a Jewish gathering place in his newly Jewish neighborhood, he created the West Oak Lane Jewish Community Center.

In a photo taken by the pool with extended family, he is the only adult diving right in.
“He’s not sitting on the side with his feet dangling in the water. He’s the one with the tube around his stomach playing with the kids in the water,” Howard Aronson said.

Avraham MacConnell died of complications from COVID-19 on May 11. He was 72.

“He liked to help anyone he could,” she said.

He served in the Vietnam War from 1967-’69 and became a Philadelphia police officer when he returned from military service. He worked as a detective in the sex crimes unit of the Juvenile Aid Division and received a commendation for going undercover to expose a youth detention center abuse ring.

He converted from Protestantism to Judaism in 1982 and retired from the police force to become a financial analyst in 1987.

His son, Edward MacConnell, said he enjoyed working with people and cultivated strong relationships with his clients.

“He cared about people a lot,” he said. “Even when he stopped talking regularly to them, he would reach out to them. He was very personable and outgoing and friendly. He loved talking to people, and he loved hearing their stories.”

He lived an active lifestyle and enjoyed skiing and golf before a stroke in 2012 limited his mobility.

He became ill with coronavirus while staying at Leisure Chateau Rehabilitation in Lakewood, New Jersey, and died at Thomas Jefferson University Hospital. He previously lived at Lakewood Courtyard.

“Everybody there really liked him,” Edward MacConnell said. “Even after he passed, I got calls from the staff saying how much they liked working with him

He visited Israel many times and wanted to be buried there. His son arranged for the safe transport of his remains to Eretz HaChaim cemetery in Jerusalem.

The businesswoman enjoyed treating her loved ones to Broadway shows and fancy meals in New York.

“We always had these amazing days or weekends and they were always at the most ridiculous restaurants that cost at least $100 per person,” niece Susan Byck said. “Everything was just such a fun adventure — we would laugh from the minute she picked us up at the train station to the moment she dropped us off.”

She started out as a designer handbag buyer for Bamberger’s and became a fine jewelry buyer when the company merged with Macy’s.

She worked her way up to become the vice president and administrator of fine jewelry in New York before taking the same position at the company in San Francisco.

At the end of her life, she lived at CareOne Assisted Living in Marlton, New Jersey.

She had a sharp sense of humor and a bold personality.

“She was very snarky. People either loved her or they just didn’t get her,” Byck said. “She always ended up getting exactly what she wanted, no matter what.”

She never had her own children, but she always put her family first, including her beloved nieces and nephews.

“She just always took such an active role in our lives,” Byck said. “She didn’t have to, she could have moved to California and never stayed in touch but she probably called me five times a day every day of my life. No matter what.” 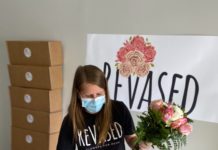