The first post, made on May 14, calls Pennsylvania Gov. Tom Wolf a “Nazi” and links to a news segment from WHP CBS 21.

“This analogy is offensive and wrong, and trivializes the suffering of six million Jews and millions of others who died at the hands of the Nazis,” the ADL statement reads. “We are dismayed to see this shameful analogy deployed by a significant political organization in Pennsylvania just 10 days after Jewish organizations across the commonwealth condemned a state legislator for comparing the Wolf administration to the Nazi Party. Holocaust analogies should only be used when referring to actual genocides, full stop.”

The other post the ADL responded to, posted on May 13, shows a cartoon of a man in the style of “Rosie the Riveter” posters from the 1940s wearing a MAGA hat and displaying the “OK” hand gesture.

“While in most cases this gesture is innocuous, it has been adopted by white supremacists as a ‘trolling’ tactic and as a symbol of white power,” the statement said.

The ADL demanded that Berks County Republican Party issue an apology, make a commitment to learning more about extremism and the Holocaust and take down both posts.

Democratic Jewish Outreach PA and the Black Clergy of Philadelphia and Vicinity announced a joint effort to maximize turnout in the June 2 Pennsylvania primary election.

Rev. Robert Collier, president of the Black Clergy, and DJOP Chair Jill Zipin said in a statement that they “are committed to working together to protect access to the ballot and to encourage our constituents to vote by mail.”

They said their organizations would work with elected officials to encourage their constituencies to register to vote by mail at www.pavoterservices.pa.gov prior to the May 26 deadline.

KleinLife in Northeast Philadelphia announced the addition of a telephone talk therapy program to stay closely connected to its senior members.

Because of the coronavirus pandemic, KleinLife shut down its daily senior center operations, which included congregant meals.

“Our goal is to keep in touch with our members during the pandemic health emergency to help them cope and manage the issues related to anxiety and depression which is often problematic within this active elderly population,” said Andre Krug, president and CEO of KleinLife.

Three Rutgers University students were honored by the Department of Jewish Studies for their achievements.

Junior Anuska of Voorhees, New Jersey, who is majoring in political science, received the Dr. Benjamin F. Glasser and Lillian Glasser Award to fund a study abroad program in Berlin. 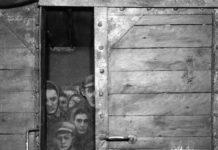