Black History Month was announced in 1969. Women’s History Month came about in 1987. Irish-American Heritage Month was created in 1990. Compared to its predecessors, May’s designation as Jewish American Heritage Month was relatively late when President George W. Bush announced it in 2006 on the heels of national celebrations marking the 350th anniversary of Jews arriving in the British colonies two years earlier.

“Its purpose is to both commemorate the contribution that American Jews have made to the fabric of our American culture, society and history — and also to mark the gratefulness of American Jews to America,” said Misha Galperin, interim CEO of the National Museum of American Jewish History.

Galperin, whose museum leads a coalition that observes the month each year, said it can be thought of as part of the “philo-Semitism” being promoted by the State Department’s Special Envoy to Monitor and Combat Anti-Semitism Elan Carr.

“Telling stories about what American Jews and Jewish people — Jewish culture — has contributed to this country is a way to combat anti-Semitism in a positive way rather than just a defensive way,” said Galperin.

While celebrations include many events hosted by Jewish institutions, Galperin’s framing underscores the extent to which the month is meant for an external audience. In addition to a presidential proclamation, federally designated months often include instruction that government agencies provide relevant education to their employees.

American University history professor Pamela Nadell said she once delivered a lecture to a group of federal workers as part of one agency’s recognition of the month.

“This isn’t really meant for the Jewish community,” Nadell said. “It’s meant for America to learn more about Jews.”

The external audience — and desire to promote American Jews throughout history in a favorable light — may explain how the month got its name, emphasizing “heritage” over “history.” The distinction might seem trivial, but it holds weight in academia.

“I have to say that I actually prefer the word ‘history,’” said Jonathan Sarna, Brandeis University professor and author of “American Judaism.”

Sarna said that heritage is generally thought of as a fixed part of one’s past to be admired from a distance.

Heritage is also often used to describe favorable stories that communities tell themselves about their shared past, said Nadell, noting that these stories are often used to make particular claims.

One example is that of 18th-century financier Haym Solomon. Solomon helped finance the Continental Congress during the Revolutionary War and was arrested repeatedly by the British, dying penniless possibly due to his extensive purchases of government debt.

“His story really got elevated as a way of showing how Jews were patriots during the Revolutionary War,” said Nadell. “For a long time you would have heard a lot about him.”

No longer particularly concerned with overt displays of communal patriotism, Solomon’s story has largely faded from contemporary American consciousness.

Regardless of terminology, many scholars believe that American Jewry was significantly shaped by the nation’s early separation of church and state. That division not only allowed Jews to immigrate to the United States for much of its history and worship freely, but meant that the Jewish community and religious practice is far more diffuse here than in many other countries with significant Jewish populations.

The absence of a chief rabbi or formal relationships between Jewish community leaders and government officials spawned an unprecedented diversity of denominations in the U.S., Sarna said.

“Just as there were infinite ways of being a Protestant in America, so it seems natural that there should be many ways of being a Jew in America,” Sarna said. “We have a kind of free market in religion, and that is enormously important in understanding the distinctiveness of the entire Jewish American experience.”

Sarna added that while Jews were often the most prominent minority group in European nations, that wasn’t the case in the U.S. Catholics, Irish Americans, German Americans, Asian Americans and many other groups faced periodic discrimination starting early in U.S. history, and African Americans faced the brunt of sustained persecution.

“Jews have been one of many, many, many people over the course of American history to suffer prejudice and opprobrium,” Sarna said. “That’s very unfortunate, but it does mean that it wasn’t all focused on one out group — the Jews — as was common in many other countries where Jews previously lived.”

The freedom that diffusion of bigotry provided may have made American Jews more comfortable engaging in the political system. Rabbi Sarah Krinsky of Adas Israel Congregation in Washington, D.C., said that civic engagement is a part of American Jewish identity in a way that is not duplicated elsewhere.

“There’s a particular version of how civic engagement is married to Jewish peoplehood and identity in the United States,” Krinsky said. “Part of that is because America has such a strong sense in its founding principles of civic participation and service that it’s only natural the Judaism born here would be responsive to that.”

Krinsky said that the U.S. Jewish community has distinguished itself in other ways as well, with many American Jews developing more progressive attitudes on, for example, women’s equality and LGBTQ rights.

“Women — but this is true for men as well — saw themselves as Americans and as Jews and those identities informed one another,” Nadell said. “They were inspired by both their Jewish traditions and by America’s freedoms to think in very strikingly different ways.”

Nadell offered the example of Grace Nathan, a Colonial-era woman who wrote an ethical will calling for her son to trim his beard seven days after her death, rather than keeping it for the 30 days or even full year that Jewish custom calls for.

”Even though she was a typical wife and mother, she was also changing Judaism and adapting it to America,” Nadell said.

Nathan’s great-granddaughter was Emma Lazarus, the Jewish activist and poet who wrote the sonnet “New Colossus” inscribed at the base of the Statue of Liberty.

Value of the past

Krinsky is skeptical of the premise that the defining traits of American Jews are exceptional.

NMAJH CEO Galperin said that the month’s focus on heritage can provide context — even for American Jews who are proud to be Jewish but struggle to articulate why.

“It gives American Jews the tools and information to understand what they’re proud of and what they can identify with,” he said.

Arno Rosenfeld is a freelance writer based in Washington, D.C. A longer version of this article first appeared in Washington Jewish Week, an Exponent-affiliated publication. 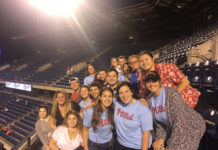