Robert Malissa, 60, was making magic on a street corner in Phoenixville. It was a First Friday, and Malissa had a pretty good rhythm going, getting a couple of laughs, making onlookers wonder just how, exactly, he did that.

A young man walked by and made a snide remark.

“Hey, a magician, the lowest form of entertainment,” he said, and kept walking.

Malissa had an idea. “I thought, you know, that’s a great opening for a show,” he said. And so Malissa made that remark the intro for his new show, “A Case for Magic.”

Malissa, a civil engineer in his non-magical hours, is used to making something appear where there used to be nothing. The Northeast High School product and current Lower Makefield resident has performed magic for 50 years, in venues as varied as an Amsterdam sidewalk to the Cheeburger Cheeburger at Oxford Valley Mall, and everywhere in between. Malissa hopes to disabuse you of the notion that there is a disconnect between his day job and his entertainment career; “a magician,” he said, “is an engineer with panache.”

Malissa’s magic career began at the age of 10. His parents, members of Adath Tikvah-Montefiore in Rhawnhurst, had a friend named Sy Constantine. That was his civilian name, of course. Onstage, he was Sy the Great.

At a picnic, young Malissa joined the adults for a game of horseshoes, and struggled to reach the stakes with toss. Seeing Malissa’s frustration, Sy the Great walked over and turned a handkerchief into a chain in front of Malissa’s eyes.

That’s the first trick he can remember seeing, and it’s the one that led to his new name: Robert the Great (name courtesy of Constantine). Constantine would take Malissa along with him to shows, feeding Malissa’s passion as the newcomer picked up tricks from Kanter’s Magic Shop in Center City, or books on magic from the Northeast Regional Library, a “treasure trove” of such material.

“It was a world that he opened up to me that I didn’t know about,” Malissa said.

He’d tag along with Constantine on shows at the Police Athletic League, and the Philadelphia State Hospital at Byberry. Malissa was mostly there as a gopher to Constantine, but every once in a while, he’d step in to show off his stuff.

Soon, it was time for Malissa to start putting on his own shows. His first
headlining gig was his family friend Jerry’s birthday party, all of Malissa’s tricks stuffed into a blue alligator skin makeup suitcase. With that first show, Robert the Great became a known and sought-after quantity, at least among the adolescent boys of Northeast Philadelphia. Back then, you could get a Robert the Great show for round-trip transportation and $5.

Malissa’s magic habit survived the glare of a high school social milieu, that place where many a childhood interest wither and die. But magic became valuable to Malissa in ways he didn’t anticipate. Magic always had a cool factor for him, (“It just blows you away, and you wanna be a part of it,” he said), but he didn’t expect that it would become a site of competence and confidence in a high school hallway. On weekends, you could catch him at Burger Doodle on Castor Avenue between Longshore Avenue and Glenview Street, doing six shows in a weekend if he was lucky.

It was then that he started to develop his “performance edge,” as he calls it. It was “real standard issue stuff,” ropes, rings, cups and balls, parlor tricks and card
manipulation, along with a few jokes. By the time he left for Albright College, he was good enough to win a talent show. That was a big victory for him; he became the magic guy on campus.

“Everybody wants to be known for something, I guess,” he said.

After transferring to Drexel University, he’d go down to Headhouse Square on Saturdays and watch a couple of talented street magicians who introduced themselves as Penn and Teller. Malissa and his friend Larry would juggle knives with Penn Jillette after the show, which is not a “chop-it-up” or “shoot-the-breeze”-like euphemism; they literally juggled knives together.

Malissa continued to improve as a magician. He started doing his own street show, and won a contest put on by the Philadelphia Houdini Club. The prize: a lithographic plate of the man himself, donated to the club by his wife, Bess. A few months after he graduated from Drexel, where he had begun the engineering work that would become his career, Malissa traveled to Europe, hopping from hostel to hostel and busking on the street. In Europe, Malissa said, street magic and performance is considered to be closer to art than stylized begging, as it is in the states.

Malissa came back and began his career as an engineer in earnest. He met his wife, Ellen, and they had a few children. He took a long break from performance, but eventually came back to it, performing regularly in Doylestown and Princeton. He joined the Society of American Magicians (Mid-Atlantic region, Assembly #4). He has plans for a magic walking tour of Philadelphia, an idea picked up from a fellow magician in Bath, England.

The thrill of winning contests and the pleasures of performance are rewards in themselves, Malissa said.

“But then eventually, you realize, you really bring joy to people. It can do that. And when you mature to that level, and you realize, that’s the value of it, then you feel you’re doing something, in your own little way. If you can bring some joy to people, you feel pretty good about that.”

Magic, he said “is a hobby that carries you into these wild experiences, if you let it.” 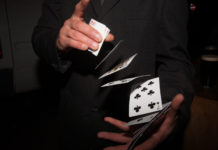 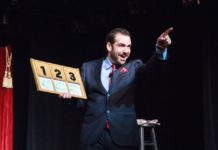 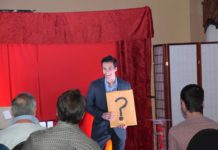