Thirty-eight Kaiserman JCC employees returned to work on April 20, a little over three weeks after all but two of 178 workers were furloughed.

Though the building itself remains closed to the public, strict health and cleanliness protocols are being developed so that as many of the staff as possible can work there.

“It’s this feeling of relief, of recognition that no one abandoned ship,” said Jordan Bravato, Kaiserman JCC’s Camp Kef director.

It was a “heartbreaking decision” to furlough staff in March, CEO Amy Krulik said. But what followed was an equally stressful test of her mettle, and that of Chief Financial Officer Kathy Sherman: applying for a Paycheck Protection Program loan, a provision of the federal CARES Act.

Krulik and Sherman attended “a bajillion” webinars and information calls that attempted to explain the mechanics and benefits of a program that millions of for-profit and nonprofit entities across the country desperately needed.

The pair familiarized themselves with the program, which initially had $349 billion to allocate. After obtaining permission from the board, an application for a $466,000 loan was submitted on April 3.

That number, Krulik explained, represents two-and-a-half times the average monthly payroll obligations of the JCC in the 2019 calendar year. The loan terms require entities to calculate that number in their request, to be submitted alongside a forest’s worth of forms. The JCC, which operates on a Sept. 1-Aug. 31 budget year, had to provide 990s, audits, 941 forms, employee health insurance documents, payroll information and more.

“It was incredibly stressful,” Krulik said.

On April 14, the loan was approved, and $466,000 was deposited the next day. The loan can be used for rent, mortgage and utilities, in addition to payroll expenses (including health insurance costs). The loan is to be paid off at a 1% fixed rate in the next two years, with up to six months of deferments. The loan can be converted into a grant if a few benchmarks are met. What exactly those benchmarks are remains unclear, as the Small Business Administration continues to issue supplementary guidance.

Two days later, Krulik let JCC department heads know that she would be meeting with the board on April 19 to discuss bringing some employees back. By April 20, full-time employees, the entire preschool teaching team and some administrative staff were rehired.

Not that they hadn’t been working in the meantime.

Many, Bravato included, contributed to the JCC’s online content trove, which includes entertainment and education for children alongside fitness videos for adults.

“No one wanted to sit around and do nothing,” said Bravato, who contributed videos of story time and slime-making. “Everyone immediately pivoted to, well, I’m going to keep doing what I need to do during this layoff, knowing that at some point it’s going to end and I need to be ready to go.”

Employees were paid hourly for that work.

“I am beyond overwhelmed in only the best way by the dedication and creativity of the staff,” Krulik said.

And with the staff back, Krulik said she is looking toward the next major decision: summer camp. 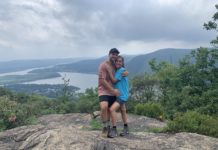