Almost 40 years ago, I wondered why there were never any television specials about Chanukah. I though for sure there’d be an audience of other young kids who wanted to recognize themselves among the stories being told. So, already a budding young activist, I set out to solve the problem. With help from my rabbi, Seymour Rosenbloom, I wrote a letter to Charles Schultz, asking him to write a “Peanuts” Chanukah, and offering our services in consultation. He never wrote back, and I’ve been disappointed ever since. Admittedly, I’ve also held a grudge against “Peanuts” and have steadfastly refused to watch the Christmas and Halloween specials.

But this week, vindication and victory were mine when “Saturday Night Seder” livestreamed on YouTube and other platforms. A star-studded fun, funny fundraiser for the CDC Foundation conceived of by Jewish talent, executed by Jews and non-Jews alike and with key parts of a real seder and commentary by several rabbis, “Saturday Night Seder” (mostly) did not disappoint. Finally, my dream of a central Jewish holiday being recognized on television was realized.

While Raban Gamliel might not have found the discussion of matzah, maror and the zeroah (shank bone) up to his standards, they were all discussed. Chad Gad Ya was mentioned, but not sung. Bette Midler’s Elijah was pretty interesting. And there was thoughtful linkage of the Exodus story to the story of Jews coming to America to escape Polish and Russian pogroms, to the story of the rebirth of Israel after the Holocaust, and to the plague we are fighting today. It was, in short, a real seder — on TV.

Some of the jokes were trite; some were inappropriate, and it was surely a mistake to allow one Jewish participant to sarcastically reference anti-Semitic stereotypes. But for the most part, it was amazing: a seder on TV! Maybe this could only happen in 2020, when we have so many different channels through which to watch content. Maybe it could only happen while we’re all sheltering in place and would welcome a third seder. Thousands of people tuned in, and more than $2 million was raised for the CDC Foundation.

All I know is that 40 years after a young girl wanted to see her religious holidays recognized on TV, it happened. To be clear, I had nothing to do with making this happen. But when you spend a career fighting tough battles — for court reform, gun violence prevention and now against hate — it’s good to be able to check something off the list as a goal accomplished. It’s an important message for all of us in this difficult, unusual time; in the words of the Rolling Stones, you can’t always get what you want, but sometimes you just might find, you get what you need. And this year, in 2020 social distancing as we fight a global pandemic and all that comes with it, “Saturday Night Seder” is just what I needed.

Shira Goodman is the regional director of ADL Philadelphia. 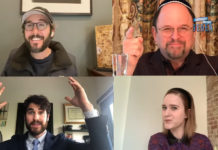