At 11, Alana Ufberg already knows that not all superheroes wear capes.

By the time Gov. Tom Wolf called on all Pennsylvanians to wear masks when leaving their homes on April 3, Alana, a Wynnewood native and sixth-grader at Jack M. Barrack Hebrew Academy in Bryn Mawr, had already sewn, packaged and distributed hundreds of cloth masks for area health care workers as part of a bat mitzvah project she’s named Masks for Manna.

“About two or three weeks before the governor’s announcement, there had been a lot in the news about mask shortages and doctors and nurses needing medical supplies,” said Janie Ufberg, Alana’s mother. “That’s when Alana decided that maybe we could learn how to make masks.”

There was no “maybe” from Alana, no cost-benefit analysis. She simply sprang into action.

“We heard that all this was going on, I saw the sewing machine in my mom’s room, and I decided to make all the masks.”

This particular sewing machine was not one idling away in a dark corner; the Ufberg ladies sew.

While the operation isn’t quite a Detroit factory floor churning out Model Ts, there is a socially distanced division of labor at play.

Dad Aaron wraps and bags; family friends have been recruited to cut and iron the fabric.

“That takes the most time,” Alana said. “The ironing.”

While Alana’s cloth masks don’t, by themselves, offer the highest protection against the coronavirus, authorities say wearing one can make you less likely to infect others. They’ve also proven valuable as extra layers of protection for doctors and nurses who, due to supply shortages, have been told to reuse surgical masks.

But Alana’s masks aren’t just providing physical protection and peace of mind to caregivers; they’re helping patients, too, especially those considered most vulnerable.

Several boxes were recently delivered to the University of Pennsylvania for oncology patients to wear. And an oncology practice in Voorhees, New Jersey — Comprehensive Cancer and Hematology Specialists — saw staffers’ spirits rejuvenated by Alana’s thoughtfulness and humanity.

“If this doesn’t inspire all of us to believe in our work and the help we can give each other,” wrote Trina Poretta, an oncologist at that practice, on Facebook, “then I don’t know what can.”

But Alana and her mom say they’ve had to recalibrate to stay relevant as circumstances change.

The cloth masks are still in demand, though less so by health care workers and more so by everyday people.

“Some hospitals have stopped accepting cloth masks,” Ufberg said. “That was right around the time where the governor said people should be wearing cloth masks, so we shifted our focus to ensure the community’s free access to Alana’s masks.”

On April 5, Alana held a curbside mask exchange/food drive outside of her home. Friends and neighbors drove by, grabbed a few masks and, in return, dropped off cans of food to be donated to the Narberth Community Food Bank.

Meanwhile, Alana still had the heroes who wear masks instead of capes on her mind.

“We wanted to make sure that we could still help the medical professionals,” Ufberg said. “So we placed an order with a place in Hong Kong that manufactures KN95 and medical-grade masks.”

After waiting six days for the masks to clear customs in Cincinnati and paying an additional unforeseen tax to release them in Philadelphia — “We were definitely concerned that they would get seized,” Ufberg said — Alana dropped off 400 KN95 masks at Lankenau Medical Center on April 10, where she was warmly greeted by four members of the Wynnewood hospital’s leadership.

By the time this edition goes to press, Alana will have delivered 1,000 more medical-grade masks to EMS personnel in Lower Merion Township.

The work seemingly never stops for the diminutive tween scheduled to become a bat mitzvah Nov. 14. It’s Barrack’s virtual edition of sixth grade during the day, then off to what her mother calls her second job, sewing masks for a couple hours each afternoon, before returning to the evening’s homework.

“We may be violating child labor laws here,” Ufberg joked.

Lucky for Alana, Barrack’s on spring break this week, giving her more time to spend on her charitable side-hustle.

Her mother was quick to point out that time’s not the only currency Alana’s spending in furtherance of her timely bat mitzvah project.

“I’m going to pay for half of the masks we got from China with my bat mitzvah money,” Alana said, explaining that she’s committed to allocating 10% of her bat mitzvah purse to tzedakah.

“That’s part of the Torah.” 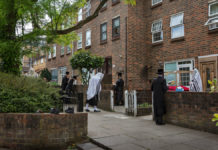 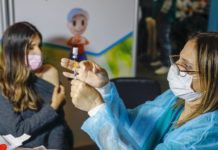 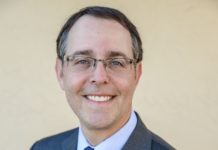