Economic conditions created by the coronavirus pandemic caused the Kaiserman Jewish Community Center to furlough 176 of its 178 full- and part-time employees on March 27, according to CEO Amy Krulik.

Concurrently, the JCC created a JCC Sustainability Fund to cover some costs going forward and applied for a $420,000 loan from the federal Small Business Administration. The JCC has also rehired some furloughed staff on an hourly basis for work in its Digital Community Center — work that can still be done during social distancing.

“We are all devastated and heartbroken to be in this position,” read a letter sent to Kaiserman members on March 27 from the two employees remaining on staff, Krulik and Chief Financial Officer Kathy Sherm. “We hope that once the virus has subsided, we will quickly resume operations and provide the services our community values so greatly. We will be activating every resource possible, including the new federal loan programs, to provide as much support as possible to our JCC staff.”

Staff members had known since March 24 that the furlough was coming, according to Krulik. That day, she sent an informal email to staff, expressing her gratitude for their work and letting them know that the official furlough email would be going out on March 27.

The email was hardly a surprise to Byron Jones.

Jones, an administrative assistant and building supervisor at Kaiserman since 2007, learned that the JCC would be closing for at least two weeks the same way that everybody else did: when he heard about Gov. Tom Wolf’s decision to close community centers, among other nonessential businesses, in Montgomery County for two weeks, starting on March 12. Even then, Jones said, he was certain that the closures would not remain a two-week affair.

The original closing came as a bit of a surprise to Krulik and the board, if only because they thought that they would be able to make the call on their own time. But as everyone has learned, Krulik said, “This timeline’s really not ours. This is the pandemic’s timeline.”

That day, all Kaiserman members and staff had to be quickly notified that the building was closed, starting the following day. It was also decided that staff would receive as much compensation as possible in those two weeks and that health care benefits would continue through April. All the while, Krulik and the board swapped ideas with JCCs across the country.

When the mandated closing was extended on March 23, Krulik said, furloughing staff ceased to be an option and became a necessity.

Since then, Krulik, Sherm, the board and the staff who remain have been as busy as ever.

The board authorized Krulik to apply for an SBA loan offered at a lower interest rate by the state of Pennsylvania. This loan, she said, is specifically meant to assist businesses in maintaining essential functions after a disaster. Krulik is also working out how the JCC will benefit from the CARES Act, which includes provisions for helping nonprofits cover payroll.

Krulik praised the Jewish Federations of North America for its care and attentiveness in getting information out to community leaders as quickly as possible.

“It’s very nice not to have to reinvent the wheel all the time,” she said.

Additionally, an email sent to members let them know that if they chose to continue paying their membership dues, frozen for the duration of the closing, they could have their monies converted into tax-deductible contributions to the JCC Sustainability Fund. The fund is meant to cover health care benefits, life insurance and long-term disability coverage for staff, and allows the JCC to pay for basic functions, like liability insurance.

Krulik has been overwhelmed with the responses she’s gotten from those who chose that route.

“I read the emails, and I burst into tears,” she said.

It was a weight off of her shoulders, she said, to learn that many staff would be made whole, if not even more, by the unemployment benefits that they were entitled to in the wake of the furlough.

Members who send their children to Kaiserman’s Robert J. Wilf Preschool and Kindergarten also can have their tuition payments converted into those aforementioned contributions.

That doesn’t mean that teachers and administrators aren’t still working, though.

Amy Foster, director of the school, is still coming into the facility every day to help teachers shoot video content for the web, easily accessible to the 160 students stuck at home. Parents and teachers, she said, have been gracious and flexible regarding the new arrangements, for the most part.

“It’s a new thing. It’s awkward — you’re just speaking to a camera,” she said. The messages delivered from teachers to students are straightforward: They tell the students that they miss them, and they hope to see them again soon.

Roberta Kitchenoff of Wynnewood, a JCC member for “many, many years,” has been the fitness director there since 2017. In the weeks before the facility closed, she had staff wiping down and cleaning exercise equipment even more than usual, but she knew that the building would soon close.

She’s worked with her staff to explain the mechanics of the furlough and how some of their benefits would kick in. She’s also worked with her fitness instructors, many of them part-time, to connect them with their now-homebound clients. Though she may have been furloughed, she still feels at home at the JCC.

“The bright spot in all of this,” Krulik said, “is that we are all working together like one community in support of one another in a way that I have never seen in all of my professional years working in this community.”

The hope, Krulik added, is that the JCC will be open for summer camp. 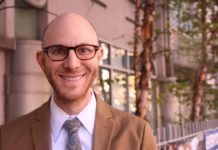