You’re at home, stuck in isolation from COVID-19 and, worst of all, just ran out of “Shtisel” episodes to binge. Luckily, “Unorthodox” scratches a similar itch.

Netflix’s four-part miniseries is its first original show to feature Yiddish as the main language alongside English. It premiered on March 26 and is loosely based on Deborah Feldman’s 2012 memoir, “Unorthodox: The Scandalous Rejection of My Hasidic Roots.”

The series follows Esty, a young Haredi woman who runs away from her community in Williamsburg, Brooklyn, to get a fresh start in Berlin. Immediately, her husband gives chase. Scenes cut back and forth between the two, with flashbacks thrown into the mix to add context and fill in the missing backstory.

For non-Yiddish speakers, the show is straightforward enough to easily follow along through the subtitles. The 50-minute run time for each episode makes the series easy enough to binge as a single four-hour movie, but viewers might consider breaking up their watch times.

The shots are long and the dialogue slow, creating an emotional experience that will leave audiences with a simmering sadness as opposed to boiling adrenaline. Viewers probably won’t cry at the end, but you’ll kind of be sad for a bit, especially if inhaling the story in a large gulp.

The first episode begins with Esty running away from home. It’s akin to a prison break, with her motivation left a mystery. It’s up to future flashbacks to let viewers piece things together as to why a girl would leave her family, possessions and way of life behind to venture into the unknown. This lack of context can be a great motivation for a second viewing.

The first scenes with Esty have minimal dialogue, relying heavily on the visual cues of actress Shira Haa, who “Shtisel” fans will remember from her role as Gitti’s oldest daughter, Ruchami. Upon arriving, she bumps into a group of classical musicians who she befriends and with whom she explores the city.

At the same time, her husband Yanky (Amit Rahav), with aid from his cousin Moische (Jeff Wilbusch), aims to track her down and convince her to return home. His mission is made even more vital, as it’s discovered that Esty is pregnant.

As the show continues, flashbacks paint Esty’s home life as a bleak one. Upon meeting Yanky for the first time at age 18 — their marriage has been arranged — she tells him:

And by different, she means depressed.

Esty is the kind of character whose default emotion is a frown. Some in the community refer to her as an orphan, as she is raised by her grandparents — her father has a mental disability and her mother is a community outsider turned runaway.

The show paints Yanky as a well-meaning mama’s boy, relaying every detail of his struggling sex life to his mother, which is circulated among the entire community, much to Esty’s dismay. Every decision he makes is, at first, related to him by someone else.

As such, he comes across as self-centered, putting his own status in the community above the needs of Esty. There’s an illustrative scene where the couple finally manages intercourse after a year of tribulations. The experience is painful for Esty, while it leaves Yanky with a smile saying, “Wow, that felt so amazing.”

It’s unnerving to watch a character so unhappy, so dissatisfied all the time. On the plus side, this does lead to a satisfying arc in the story’s resolution.

Esty’s Chasidic life in Williamsburg shown in the flashbacks is juxtaposed with the modern cosmopolitan city that is Berlin. The show’s Chasidic characters view the city for what it was, ever remembering the massacre of Jews at the hands of the Nazis.

But Esty’s new companions see the Holocaust as history, events having occurred long ago. This puts Esty at odds with Yael, an Israeli student (Tamar Amit-Joseph). There’s a screen where Yael is poking fun at the Chasidic reverence of Holocaust memorials.

“My grandparents lost their whole families in the camps,” Esty says.

“So did half of Israel, but we’re too busy defending our present to be sentimental about our past,” Yael responds.

“Unorthodox” is a drama full of likable characters and an easy-to-follow plot. If you’re a fan of “Shtisel,” this is differently worth a watch. 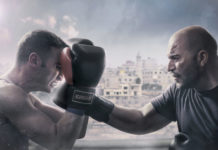 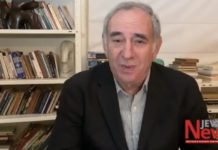 Passover Greetings from the Cast of ‘Shtisel’ (Video)