Like many modern women, Michelle Azar Aaron juggles many balls.

She is a singer, actor and writer of her one-woman show, “From Baghdad to Brooklyn,” which explores her father’s childhood in Iraq and her Brooklyn-born Ashkenazi mother. Azar Aaron has received awards for her work and has appeared in many television shows and musicals.

She is now juggling another ball — preparing for Passover. Because she’s drawn to her father’s life in Iraq, Sephardi recipes and customs are integral to her Passovers today.

Her favorite charoset hails from Yemen. It’s infused with ginger and cayenne pepper, which impart spicy flavor, sweetened with dates and honey.

She makes huevos haminados, hard-boiled eggs, a must at Sephardi holiday celebrations.

“I put eggs and onion skins in the oven all night,” Azar Aaron said. “After they’re cooled and dry, I write everyone’s name on an egg with a Sharpie. At seders, you crack your egg on someone else.” It’s a friendly game beloved at Sephardi Passovers.

“Our seders are interactive and playful,” she said. “They start in the guesthouse in our backyard.”

Scallions are used to symbolize the way Egyptians whipped Hebrew slaves; guests hit each other with them.

The seder and first courses occur in the guesthouse.

“We then put on the sprinklers, so everyone gets a little wet running into the house,” she said. Just in time for the main course and dessert. She always bakes an orange date almond torte. “There’s lots of oranges in Sephardi cooking,” she says. “We finish by singing a Persian style of ‘Dayenu.’”

“I’ve never touched the ground in Iraq, so it’s odd this attachment I have to my father’s homeland,” she said. But she is keeping the memory of Passover customs alive from a country where most Jews have fled.

This zesty charoset tastes best when made a day or two in advance.

Peel the ginger root. Dice it and then chop it. Move it to a small saucepan and add ½-teaspoon of water. Cover the saucepan and heat over a medium flame for 1-2 minutes or until the water nearly evaporates. Watch carefully so the ginger doesn’t get scorched. Reserve.

Remove the charoset with a spatula. Refrigerate it in a container with a lid. It lasts 3 weeks or longer when refrigerated. Bring to room temperature before serving.

Served at all Sephardi celebrations, these creamy textured eggs are superior in flavor to hard-boiled eggs.

Equipment: a large stain-resistant pot that can go on the stove and in the oven. It should come with a tight-fitting lid.

Place a shelf on a middle rung of the oven, so that the pot you’ve chosen will be centered and not too close to heating elements. Preheat the oven to 225 degrees.

Cover the pot and bring it to a simmering boil. Remove it from the heat for 2 minutes. Place the pot inside the oven for 8 hours. Remove the eggs carefully with a slotted spoon and place them on paper towels to dry. The eggs will be brown or reddish brown, representing Passover’s roasted egg.

Serve the eggs warm, at room temperature or refrigerate until serving. The whites will be tinged sepia brown. To reheat, boil them for 3-5 minutes.

This tasty stew is typical of Moroccan Jewish cuisine. Because Sephardim eat rice during Passover, this dish is often served with rice.

Optional: Rice, prepared according to package directions for 8 servings.

Preheat the oven to 350 degrees. Cover a baking sheet with aluminum foil. Scatter the almonds on the foil, making sure they don’t overlap. Place the almonds in the oven and bake until golden and fragrant. Watch carefully as almonds burn easily.

Remove the almonds from the oven and bring them to room temperature. Store them in an airtight container at room temperature for up to 2 days before preparing the tagine.

Peel the ginger root. Dice it and then chop it fine. Chop the onion into small pieces. Drizzle oil into the Dutch oven. Place it over a medium flame until the oil is warm, about 1 minute. Sauté the ginger and onion, stirring often, until it is fragrant, about 2 minutes. With a slotted spoon, remove the ginger and onion and place it temporarily on a plate.

Sprinkle the chicken with salt and pepper. Move the chicken to the Dutch oven in 2 batches. Add more oil if needed. Sauté until golden brown on all sides. Turn off the flame. With tongs, move the chicken to a platter. Let the oil and chicken fat cool to room temperature. Pour off as much as possible. Some oil will remain.

Simmer for 20 minutes, or until the prunes are tender and the chicken is cooked through. Check every few minutes to see if the broth is evaporating. Add more, if needed. This can be made to this point 2 days ahead, refrigerated and reheated over a low flame.

Place the rice in a mound in the center of a large deep platter with a generous rim. Using tongs, place the chicken thighs around the rice. Spoon the broth and prunes over the chicken. Sprinkle the almonds over the chicken and rice. Serve immediately.

Typical of North African Jewish cuisine, this moist cake is steeped in the fragrance of refreshing oranges.

Equipment: A food processor, a 9½-inch springform pan and an electric hand mixer

Fit a food processor with the metal blade. Place the almonds and ¼-cup sugar in the bowl of the food processor. Grind the nuts for about 30 seconds. Then pulse on and off until the mixture resembles coarse sand. Sprinkle in the cinnamon and pulse briefly, until combined. Move the nut mixture to a bowl and reserve. Clean the food processor parts.

Wash the oranges with a little liquid soap and rinse well. Move the oranges to a medium-large saucepan. Cover them with water. Place the lid on the pan and bring the water to a boil over a medium flame. Turn the flame to low and simmer the oranges for about 40 minutes, or until softened in the center. Add more water, if necessary. Discard the cooking water.

Add cold water and a couple of ice cubes to the saucepan to let the oranges cool through. Pour off the water and dry the oranges with paper towels. Cut the oranges into 8 pieces, including their skin. Remove any coarse pith and all the seeds. Reserve.

Preheat the oven to 375 degrees. Coat the springform pan generously with oil. Sprinkle a teaspoon or so of sugar into the pan and shake it to coat as evenly as possible. Discard any excess sugar. Reserve.

Assemble the food processor again, using the metal blade. Cut the dates into 4 pieces and then chop them. Move them to the food processor bowl. Add the orange pieces, including the peel. Grind the pieces until a somewhat-coarse puree forms. Reserve.

Take 2 eggs and separate the yolks from the whites. Place the egg whites and ¼-cup sugar into a medium-sized bowl. Using an electric hand mixer, beat until stiff, shiny peaks form. Do not overbeat or the egg whites turn watery. Reserve.

Add the 4 whole eggs, the 2 reserved egg yolks and the remaining ½-cup sugar into a large mixing bowl. With the electric hand mixer, beat until the mixture turns airy and light. Be patient, as this takes several minutes. Beat in the orange-date mixture and the almond mixture until well combined. Fold in the beaten egg whites and combine on the mixer’s low setting until no trace of the egg whites remain. Using a spatula, move the mixture to the prepared pan.

Bake for 50-60 minutes or until the torte is lightly browned and the center springs back when gently tapped with a forefinger. Cool to room temperature. Gently run a knife around the edge of the cake to separate it from the pan before releasing the spring.

Serve immediately or wrap it well in foil and serve the
next day. 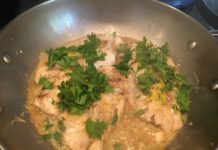 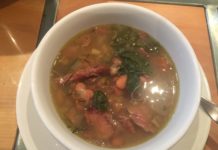 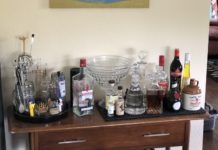