Grindcore X Crust, a coffee shop that opened in November at 4134 Chester Ave., has a couple things going for it that you might not find at similar establishments.

It’s vegan, for one. It serves a pretty mean black-and-white cookie. Drawing on the sensibility that animates the original Grindcore House location at Fourth Street between Tasker and Dickinson streets, the long cushioned bench that seats a good portion of the customers is plastered with metal band logos and art (the décor is definitely heavy on bones).

And, as of Feb. 17, the vegan coffee shop is now certified by the International Kosher Council as a kosher establishment, to the delight of some kosher diners.

“It means having another location, another place where I can get a bite to eat,” Moriah Levin said. Though she lives in South Philadelphia, new kosher establishments that help her to expand her mental map of where she can eat are always welcome, she said.

Grindcore X Crust is the result of a collaboration between Grindcore House, a South Philly-based vegan coffee shop, and Crust Vegan Bakery, an operation mostly dedicated to wholesale sales, based in Manayunk.

Shannon Roche founded Crust with Megan Benz in 2015, after leaving an academic career in marine biochemistry. Roche said that Rabbi Eliezer Hirsch of Mekor Habracha, who happens to be the rabbinic administrator of the Center City Philadelphia division of the IKC, approached her and Grindcore House owner Mike Barone about koshering their new establishment shortly after opening. (Crust had been certified for years.)

The Center City Philadelphia division of the IKC, Hirsch said, will often identify eateries that could make simple, easy transitions to kosher standards to facilitate kosher eating for Jewish people in the city (though many locations reach out to IKC, too, he added). Many vegan and vegetarian establishments are already dedicated to serving as many special-diet constituencies as possible, and are often receptive to the idea of adding kosher diners to their ranks, Hirsch said.

“Those are much easier than any other kind of restaurant,” he said. “I try not to deal with meat at all.” It helps, Hirsch said, that the service offered by IKC is free.

It was an easy transition for Grindcore X Crust, according to Roche. In her previous experience with IKC, she learned the basics of kashrut, and of the regular upkeep needed to ensure continuing certification; IKC representatives show up to the bakery now and then and, when new recipes are created, she and Benz will submit them to the IKC for review.
In the case of Grindcore X Crust, the only ingredient that had to change was the brand of red wine vinegar that was being used in certain products.

Barone, Roche said, had wanted to do something similar with the original Grindcore House location years ago (Barone, who could not be reached for comment, also co-owns Blackbird Pizzeria, a vegan pizza place). But the mock-meats he was serving were not yet kosher certified, and he couldn’t go ahead with the process; advancements in the market, due to a much higher number of people on plant-based diets, have made such problems much less common, Roche said.

Levin, Roche and Hirsch all spoke about the need for more kosher and vegan eateries in the city. Happy as Levin is about the addition of Grindcore X Crust to the ranks, she said the city still lacks a critical mass of sit-down, formal kosher restaurants enjoyed in some other areas with high Jewish populations.

“It’s really lovely,” she said of Grindcore X Crust, but it is just another piece in the puzzle for kosher diners, in her view.

Hirsch and other IKC divisions from across the country share tactics and tips for koshering restaurants all the time, he said, all with the same goal of greater accessibility for kosher diners. It’s a pretty good deal for everyone, he believes; restaurants can get a free certification and more customers with a little bit of thought, and IKC representatives get another place to eat in exchange for a little bit of legwork and some regular check-ins. 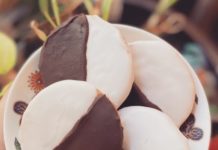