The National Museum of American Jewish History announced March 2 that it has filed for reorganization under Chapter 11.

The museum, located at Fifth and Market streets, owes more than $30 million to bondholders and about $1 million to unsecured creditors, according to interim CEO Misha Galperin.

A little over half of that debt is owned by the Bridgehampton National Bank on Long Island, while the remainder is held by the donors and lenders who helped finance the building’s completion.

Galperin and the board of trustees made the decision last week.

“It’s not a pleasant thing, but it’s a positive thing for the museum,” he said. “We will continue to fill our vital role in preserving and interpreting American Jewish history,” board of trustees chair Philip M. Darivoff said in a statement. “While no institution chooses such a reorganization lightly, this decision is expected to bring with it a reduction in debt that will create a new level of sustainability that assures our part in telling a unique and compelling story of the American experience.”

The reorganization is being advised by the law firm of Dilworth Paxson LLP, according to the same statement.

NMAJH was originally founded in 1976, located in a shared space with Congregation Mikveh Israel a few blocks away from its home today. In 2007, ground was broken on the current location, where the new version of the museum would educate visitors on Jewish life in America, beginning with the arrival of Jews at New Amsterdam in 1654 — 23 adults and children expelled from Brazil.

A direct line can be drawn, according to Galperin, between the timing of the construction and the massive debt accrued. The years 2007-2010 were a low period for philanthropy, and particularly Jewish philanthropy, Galperin said. Consequently, the founders were forced to borrow much more than they had anticipated to complete construction.

According to an article in The Philadelphia Inquirer written as the building neared completion, construction costs were about $150 million. The museum spent years raising millions from the ranks of big-name Jewish world donors — the likes of Sidney Kimmel, Ed Snider and Raymond Perelman, among others — but it was still not quite enough to cover the costs of the 5-story, 100,000-square-foot building.

Regardless, the museum opened to great fanfare on Nov. 15, 2010, when then-Vice President Joe Biden was joined in marking the occasion by then-Mayor Michael Nutter and then-Gov. Ed Rendell, among other luminaries. Fifty shofar blowers announced the museum’s completion from the fifth-floor balcony, and Rabbi Irving “Yitz” Greenberg affixed a specially made mezuzah to the door. A museum celebrating the Jewish experience of the United States of America had opened a stone’s throw from the Liberty Bell.

The core exhibition was created by a team of nationally-known historians of American Jewish life, their words joined by tens of thousands of objects. Among them were symbols of Jewish success in the United States: things such as Steven Spielberg’s Super 8 camera and a baseball signed by Sandy Koufax. The museum held George Washington’s letter to the Hebrew Congregation of Newport, Rhode Island, assuring the congregants that the government of the new nation “gives to bigotry no sanction, to persecution no assistance.”

Indeed, NMAJH can claim ownership of one of the most important documents in United States Jewish history. The aforementioned line adorns the Independence Mall-facing side of the building.

At the same time, NMAJH’s event spaces played host to a wide range of programming and organizations.

This past winter, Supreme Court Justice Ruth Bader Ginsburg came to the museum to be inducted into the Only in America Hall of Fame; in just a few weeks, refusenik Natan Sharansky will appear on a panel at the museum with Malcolm Hoenlein, executive vice president of the Conference of Presidents of Major Jewish Organizations, and Elan Carr, Special Envoy to Monitor and Combat Anti-Semitism.

Last spring and summer, the museum hosted Maira and Alex Kalman’s “Sara Berman’s Closet,” its first-ever public art installation. In October of 2019, the museum hosted the Board of Rabbis of Greater Philadelphia in commemoration of the one-year anniversary of the Tree of Life*Or L’Simcha shooting.

Yet attendance and membership never quite hit the benchmarks that the museum board and staff expected, and there were consequences.

In 2017, then-CEO Ivy Barsky told the Inquirer that the museum welcomed around 100,000 visitors in the prior year; initial projections had pegged annual attendance at 250,000. That same year, Barsky took a voluntary pay cut as staff members were laid off and the museum café was closed.

Barsky resigned last summer, and Galperin was brought in to replace her on an interim basis. At that early stage, he said, the problems that the museum faced were clear. He and the board spent the following months negotiating with lenders and creditors to find a way out of debt that did not include filing for bankruptcy. Ultimately, they were unsuccessful.
“There’s been a lot of enthusiasm for what the museum is, does and will be, but there’s not been a lot of enthusiasm for paying off debt, on the part of donors,” he said.

Galperin remains optimistic that the museum will emerge with a new verve and ability to function. The “enormous burden” of the debt, he said, has constrained the museum from being able to fully pursue its mission. Once it is resolved, he believes, NMAJH can take another step forward in its development.

“Reducing the debt is going to make us significantly more vibrant and healthy,” he said. 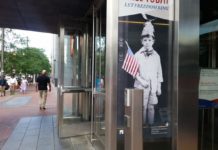