Not a minimalist by nature and tired of pretending just to keep the mob away?
Tired of so-called experts trumpeting the virtues of “clean lines” and monochromatic kitchens and hard, polished surfaces that both look and feel as slate gray and icy cold as the middle of a Danish winter?

Well, take heart, reluctant minimalists, closet maximalists and fellow contrarians: It seems that the tide in residential interior design and home décor is turning, and it’s becoming brighter, softer and more appealing to all of the senses.

Trending down are the looks that, while popular over the past few years, have always felt a little forced, a little contrived. The conspicuously rustic farmhouse chic look in an urban locale is mercifully on its way out, said Michelle Buchert, founder and owner of 332 Concepts in Wyndmoor.

“Authenticity and embodying where you are, embodying your landscape — that makes the most sense,” said Buchert in regard to the farmhouse trends of the last few years. “I don’t think reinventing the wheel and trying to make your chic city apartment look like a farmhouse is a good fit.”

Similarly, farmhouse chic’s strangely familiar yet distant cousin, industrial chic, while not necessarily on its way out, may be evolving in character and purpose — look for the industrial elements to serve mostly as a pointed foil to the spare, burnished perfectionism of the past decade’s minimalism. In other words, with respect to the new contemporary modern style, “expect exposed rust and unfinished edges as opposed to crisp and clean and finished,” Buchert said.

These are predictions that Buchert’s portfolio has given her the credibility to make. She’s owned 332 Concepts since 2011 and has designed opulent homes for wealthy clientele and dream homes for everyday people; she’s designed the living quarters of a yacht moored in Longport, New Jersey, and the interiors of yoga studios, karate studios and the Logan Square branch of City Fitness.

Making the rounds of the design show circuit is her industry’s version of continuing education, and attendance is basically mandatory — to source materials, chop it up with vendors and find out where and in what direction the winds of fashion will take us.

Each year Buchert attends DesignMiami to see what the world’s top designers are showing, and this year it seems as though she’s returned to enliven the spirits of those who’ve long bemoaned the whole minimalist thing.

“The concepts I’ve seen trending at this year’s design shows are bright colors, natural textures, soft curves and almost-cellular shapes,” said Buchert. “It is soft; it is warm; it is earthy.”

Speaking of nature’s powerful effects, some of the home furniture Buchert saw showcased in her most recent trip to Miami might be said to mirror some of the effects one might feel after ingesting some of nature’s most powerful hallucinogens.

“This year I saw a lot of fluid shapes and bright colors,” Buchert said. “I saw pieces of home furniture that almost look like blobs of mercury or water, contrasted against bright yellows … or pinks. So what we’re seeing now is a lot of color contrasts and shapes that, perhaps, we’re not used to seeing in the home.”

Trippy. And a far cry from the brand of minimalism that dominated Buchert’s industry when she opened for business.

“Honestly, minimalism was a huge thing: the clean lines, the bright, crisp colors, that cold look. But I feel like after living in that crisp, clean, rather sterile lifestyle, people noticed that it isn’t really that comfortable,” Buchert said. “We want texture; we want patterned designs, natural elements and woven rugs, as opposed to something cold and crisp and with a sheen to it.”

“And we want color,” she said. “Sea-foam greens and bright yellows and warm woods — natural tones. Everybody is realizing that the natural feel makes us feel better.”

If you really believe in the salutary efficacy of the natural feel, you may want to take things a step further. Freestanding plants and terrariums always add a nice natural touch, but new alternatives allow us to interact with the natural world from inside our own homes like never before.

Take a look at developments in biophilic design. Picture an entire wall of your house covered in plant life. It might sound like science fiction, and it doesn’t necessarily sound like a hassle-free existence, though it’s out there, and the thinking is that its stuff like this that actually makes people happier.

“Biophilic designs been huge,” Buchert said. “I’ve been seeing moss walls everywhere. And it makes sense; it has a direct impact on well-being and how we feel. We’re seeing a lot of it in high design health care and hospitality, and I wish we would see more of it in places that need it, like doctor’s offices and therapy offices.”

While there’s nothing like organic life to literally make a living space less sterile, there are other options to liven up a room while keeping nature at a safe distance. Among them is something that has, for several decades now, been seen as an anachronism, the anti-cool: wallpaper.

“Wallpaper is back,” Buchert said. “People have it stuck in their head that wallpaper is like an old, stagnant look. But the materials that I source and what’s available on the market these days will blow your mind. Wallpaper can have such a dramatic impact on space, and even if you do just one accent wall, the slightest touch of wallpaper, especially textured wallpapers, can change the whole dynamic and rhythm of a room.”

So if this season your home feels hopeless, or hopelessly out of style, think of the triumphant comeback of wallpaper: What’s old can, indeed, become new again. And then, maybe, call an expert — resurrection is serious business.

“As designers,” Buchert said, “we have to bring life where there is no life.” 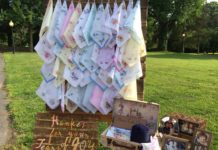 DIY Weddings Allow Millennials to Customize Their Nuptials and Save Money