Israeli Diplomat to Participate in OneTable Event in Philadelphia

Sarah Weiss Maudi, a legal adviser to the Permanent Mission of Israel to the United Nations, will meet with participants of a OneTable dinner event slated for 7:30 p.m. on Feb. 21 in Philadelphia. To sign up for the private event, email [email protected]

Young Jewish Leadership Concepts co-founder Lou Balcher said that Maudi has spoken recently about how to engage Jewish students on campus, describing Israeli achievements that are of interest to young people.

There was song and improv and dance at the Tri-State JPRO’s inaugural event “Jewish Philly’s Got Talent!” on Feb. 12.

The organization, an agency of the Jewish Federation of Greater Philadelphia, presented the talent showcase to representatives from synagogues, schools and Jewish organizations who wanted to learn more about entertaining and engaging
programming options.

Audience members filing into the auditorium in the Jewish Community Services Building in Center City were given packets with details on each of the 23 presenters, including services offered, group sizes, target audiences, references and contact information. Then the presenters took the stage to show their stuff, representing a range of skills and focus areas, from comedy and rap to klezmer and walking tours.

Avner Schwartz of Haverford made it to the sixth episode of “Kids Baking Championship” on the Food Network before being eliminated. He finished seventh out of 12 competitors. The winner has yet to be revealed.

On Jan. 5, he and a friend teamed up to serve baked goods to Holocaust survivors at a Jewish Family and Children’s Service event as part of Avner’s bar mitzvah project.

Thomas Jefferson University and Ben-Gurion University of the Negev in Beer-Sheva, Israel, announced Feb. 10 a memorandum of understanding that formalizes a relationship dating to 2015.

Representatives from the universities met to define research areas of mutual interest, including health disparities, bioethics and autism research.

In addition, bio-convergence — integrating numerous scientific fields to address unmet needs in health and other industries — will be considered for future collaboration. And the universities agreed to complete the approval of a joint Ph.D. program and to explore other opportunities for collaborative study.

Stockton U. Chosen as Testing Site for Interactive Holocaust Program

Stockton University announced Feb. 12 that its Sara and Sam Schoffer Holocaust Resource Center was chosen as the beta testing site for a national educational interactive biography program with a local Holocaust survivor.

“Dimensions in Testimony” is a partnership with Stockton, the New Jersey Commission on Holocaust Education and the University of Southern California Shoah Foundation.

Holocaust survivor Edward Mosberg, 94, from Parsippany, New Jersey, told his story on video for the Shoah Foundation. In turn, the video was incorporated into an interactive program in which Mosberg can answer questions about his life and experiences.

Area schools will bring students to the Holocaust Center to learn from Mosberg over the next three years.

“This program represents an extraordinary opportunity to learn from a Holocaust survivor,” Stockton President Harvey Kesselman said. “We all need this.”

JEVS will offer free tax preparation every Saturday until April 11 from 9 a.m. to 2:30 p.m. at Orleans Technical College, 2770 Red Lion Road in Philadelphia, through its Volunteer Income Tax Assistance program.

Free tax prep also will be available at the same location every Thursday from 4-6 p.m. until April 11.

The process is open to community members who meet one of the following criteria: make $56,000 or less, have disabilities or are limited English-speaking taxpayers who need assistance in preparing their own returns. 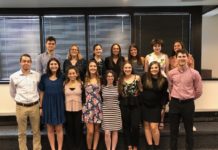