The verdict came just six days after his trial began. Goldstein was taken into custody, where he will remain until sentencing on May 4. His attorney, Perry de Marco Sr., plans to appeal.

“This verdict is a triumph for a society that is increasingly trying to ensure justice for victims of sexual assault and rape,” Philadelphia County District Attorney Larry Krasner said in a statement. “We all owe a special thanks to the two courageous women who came forward and testified in this matter. They showed special courage that ultimately will not only protect others from this defendant, but will protect others from a culture that tolerates rape and sexual assault in fraternities, in academia, and in society.”

Goldstein’s trial began on Feb. 12, nearly two years after he was initially charged with attempted rape.

Two different women contacted the police in the months following their alleged assaults. The first report came in April 2018 and referred to an incident that took place in February 2018; the second report was made in August 2018 about an incident in November 2017.

In accounts given to police prior to the trial, both women said that Goldstein forced them to perform oral sex on him. One alleged she was able to push herself away, which ended the ordeal; the latter said she ran from the room.

On the first day of trial, the courtroom on the sixth floor of the Justice Juanita Kidd Stout Center for Criminal Justice at 13th and Filbert streets was packed with friends and family of Goldstein. By the posted time of the trial, not a single seat was available, and conversation that had begun in lighter shades was momentarily hushed as Goldstein walked in just after 9:30 a.m., flanked by de Marco and his team. At around 9:50 a.m., silence was requested of the gallery. A few minutes later, Judge Timika Lane, a Philadelphia County Court of Common Pleas judge since 2013, entered a silent courtroom.

Jury and defendant were quickly sworn in, Goldstein’s charges were read aloud and Goldstein’s plea — not guilty — was submitted. The jury, selected the day before, was read a lengthy set of instructions by Lane: Don’t talk to anyone involved in the trial. Consider only what is said during trial. Assume innocence.

Just after 10 a.m., Assistant District Attorney Zach Wynkoop offered the government’s opening statement. He would lay out, he said, three stages of events, each proving Goldstein’s guilt. The accounts of the two women would establish that they both, at various points, explicitly said “no” to Goldstein’s request for oral sex, often through tears; that Goldstein, conscious of consent not given, disregarded the “no” and forced himself on them; and that he was aware of what his disregard meant. Wynkoop spoke to the jurors in a measured tone, slowly addressing the full length of the jury box.

Though the state would be bringing in a slew of witnesses who would corroborate the testimony of the two women, Wynkoop said, their inclusion was superfluous. The accounts of the two women, he said, would have been sufficient to establish their credibility and Goldstein’s guilt. With that, he ceded to de Marco.

In his opening statement, the defense attorney for Goldstein told the jury that if a book were to be written summarizing the trial, it would be called “sex, drugs, rock ’n’ roll gone wild, 2018, or 2020.”

On college campuses, de Marco said, the climate is such that women pursue sexual partners with the same aggressiveness as men; they dance with men, drink with them, “dress like a hussy” and lead them on. The effects of the #MeToo movement on campus sexual culture, he said, had made even more confusing an already muddy time. He argued that it was in this arena of confusion that the two women had gotten lost.

“There are no bad people on either side of this case,” de Marco said.

Goldstein, de Marco contended, and as character witnesses would later attest, was a model student, sporting a 3.15 GPA and earning the respect of his fraternity brothers, as evidenced by his election to the position of president.

“This ‘horrible encounter,’” as de Marco put it, was nothing compared to other allegations of sexual assault he had seen over his nearly five decades as a defense lawyer. And besides, de Marco, said: “If you don’t want to get burnt, don’t be stickin’ your foot in the fire.”

After the opening statements were made, witnesses for both sides spoke in front of the jury for the rest of the day, the following day and one more half-day after that. The jury deliberated for half of the day on Feb. 14, broke for Presidents Day and reconvened on Feb. 18, delivering a verdict in the early afternoon. 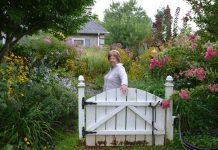 At 85, Stephanie Cohen Continues to Tend to Her Garden