We recently lost Kirk Douglas, who was not only a great actor, but was also noteworthy for his enthusiastic embrace of Judaism.

I learned about Douglas as a child growing up in Israel in the 1940s and ’50s. Born in the shadow of the Holocaust, Israel struggled to survive as a nation, to create a homeland for the Jewish people, and to foster a proud Jewish identity for millions around the world.

We had many proud, heroic role models in our ancient history, including Samson, Deborah the prophetess, Gideon, King David, Judah the Maccabee and Bar Kochba, but none since then. As a child, I watched Douglas with great enthusiasm; he was Jewish himself and depicted strong Jewish and non-Jewish men in several of his movies.

He embodied a new Jew who was both physically and emotionally strong.

As Col. Mickey Marcus in “Cast a Giant Shadow,” for example, he illustrated to the world that Jews were courageous, proud and physically strong, who faced the world with valor and who were not deterred by danger and adversity. Marcus was an American military officer who volunteered to help Israeli soldiers to defend the new state against an invasion by its Arab neighbors. He was killed while attempting to break the siege on Jerusalem during the 1948 Israel War of Independence by paving an alternative road to the city.

Even today, when I travel to Jerusalem, I am reminded of Marcus’ story and the realization that Jerusalem is no longer besieged.

After losing my vocal cords to throat cancer 12 years ago, I was invigorated by Douglas’ determination to overcome his inability to speak after suffering from a stroke at the age of 80. I was also determined to regain my ability to speak; hearing about Douglas’ perseverance inspired me to do the same.

I was surprised and thrilled when I unexpectedly received a personal letter from Douglas nine years ago. He had read my book “In the Sands of Sinai: A Physician’s Account of the Yom Kippur War,” in which I describe my experiences as a battalion physician in that war. The book describes the daily fight for survival in the battle zone, and the ongoing struggle to preserve one’s humanity, some of the same issues faced by Marcus.

The letter illustrates Douglas’ love of Israel and how he was still engaged in learning about is Jewish identity, despite his profound disabilities at the age of 94. He was an amazing person who influenced the lives of many people through his movies and personal example. He will always be my hero.

Itzhak Brook is a professor of pediatrics at the Georgetown University School of Medicine in Washington, D.C. 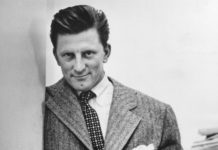