Ralph Bloch (“Death Penalty Doesn’t Solve Anything,” Feb. 6) states that in the Tree of Life massacre case that the Department of Justice, which is a federal department, is seeking the death penalty. That is true. Bloch then mentions that Pennsylvania Gov. Tom Wolf has declared a moratorium on signingdeath warrants. That is also true.

What Bloch is missing, however, is that a state governor does not have a role in signing death warrants in federal criminal cases but only in cases in the state’s court system. As the death penalty in this instance is being sought in a federal court case, the executive authority on whether to carry out or commute a death sentence that has been imposed and upheld in federal courts rests with the attorney general of the United States and ultimately, the president of the United States, not the governor of Pennsylvania.

It is important to be mindful of the separation of federal and state jurisdiction in such cases.

Gene London Will Be Missed

I loved Gene London’s show (“TV Host, Hollywood Fashion Maven Gene London Dies at 88,” Jan. 30). My husband and I were just talking about it a few weeks ago. I’m so glad he was able to continue to use his artistic skills after the show went off. The world truly needs more shows of simplicity and humanity like his. 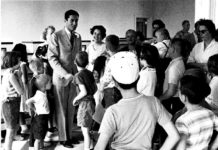