I returned from a weekend away during which my son and two of his cousins stayed at my house to find a half-empty box containing three cinnamon-sugar Federal Donuts on the kitchen table.

This was initially a pleasant surprise, but alas, they had gone a bit past their prime and were heading toward staleness.

I couldn’t bear to waste them, so I thought about ways to use them and came up with “bread pudding.” This is a standard recipe, but the addition of the doughnuts gives it a cake-ier vibe. We served it warm with fresh whipped cream, but you could get as creative as you like — caramel sauce, hot fudge, berry puree, ice cream and, depending on what type of doughnuts you have that are at the end of their useful life, you can vary the flavor profile to suit.

The likelihood of having leftover Federal Donuts is slim, I know, but on the outside chance, here’s the recipe.

Heat your oven to 350 degrees.

In a 1.5-quart baking dish, place the doughnut pieces.

In a medium-sized bowl, whisk the eggs, cream, milk and vanilla. Pour it over the doughnuts, and put a plate or a flat pot lid on top to weigh it down. (This is intended to submerge the donut pieces to enable them to absorb the cream mixture).

Allow the doughnuts to sit in the cream for at least 30 minutes and up to several hours.

Bake the bread pudding for 45 minutes until the top is starting to turn golden brown and the custard is set. Serve warm, at room temperature or chilled. 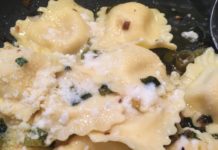 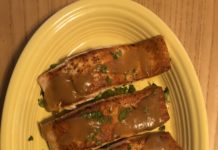 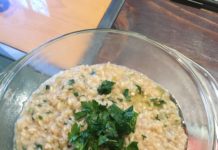