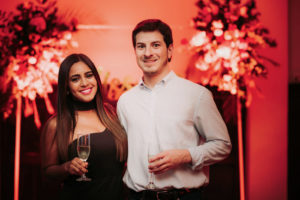 Diedre and Stephen Cole of Huntingdon Valley announce the engagement of their son, Jared Reed Cole, to Kaline da Silva, the daughter of Chirlene da Silva and the late Benjamim Alves of Recife, Brazil.

Jared earned a bachelor’s degree from Pennsylvania State University and is employed as a senior accountant at Savran Benson LLP in Bala Cynwyd.

Kaline graduated from Faculdade Metropolitana in Brazil with an undergraduate degree in law and has worked as a college promoter.

Sharing in the couple’s happiness are Jared’s sister and brother-in-law, Ashley and Michael Occhiogrosso and their son Henry, and his Uncle Steven.

The couple is planning a 2021 celebration in Philadelphia.