Update: The original article was corrected on February 14, 2020 to correct information regarding Nathan Hilu’s parents.

In a 2012 profile, Tablet referred to Nathan Hilu as perhaps “the most significant Jewish outsider artist you’ve never heard of.”

And now, due to the chance introduction of an eccentric art collector to a museum director, an exhibit of his work is coming to Philadelphia for the first time.

“Hilu Through the Eyes of a Collector” will be on display at the Temple Judea Museum from Jan. 17 to March 6. The museum is located inside Reform Congregation Keneseth Israel in Elkins Park and operates 9 a.m. to 5 p.m. on weekdays, 9 a.m. to 9 p.m. on Fridays and 9 a.m. to 2 p.m. on Sundays.

Hilu’s cartoonish images are sketched with ink and pastels on paper. His work commonly depicts scenes taken from his life, showcasing the Jewish community of the Lower East Side. Other pieces were inspired by Hilu’s time in the military where, most notably, he served as a guard of high-level Nazi prisoners during the Nuremberg trials. His images are layered with text both in Hebrew and English, some with large amounts of text on the back.
Museum director and curator Rita Poley said the humorous, casual nature of Hilu’s art is a nice contrast to the museum’s previous historically natured exhibition on President Theodore Roosevelt. It’s a style the museum doesn’t commonly delve into.

“It’s sort of rather surprising because from a distance, as you’re walking in, it looks like a traditional exhibition of two-dimensional art, but as you get closer, you began to see these images that are so funny and so cartoon-like and so comic-like and so full of life and so untraditional for a museum exhibition,” Poley said. “Jewish art usually means something much more traditional to people, so I like to show this other aspect of what can be considered Jewish art.”

Hilu is often described as an “outsider artist” due to his lack of formal training. While he did study at institutions like the Art Students League, he was largely self-taught.

The artist was 92 when interviewed for a profile in The New York Jewish Week published January 2019, just a few months before his death. Hilu was born on New York’s Lower East Side in 1926, according to the profile. His parents, Leon and Rachel, were Syrian immigrants. His mother was the daughter of Hacham Bashi Nissim Andibo. As chief rabbi of Damascus, Andibo is noted for having blessed Israeli spy Eli Cohen before his execution in 1965.

Hilu’s family moved to Pittsburgh when he was young to live among a mostly Ashkenazi community at the Irene Kaufman Settlement House.

At 18, Hilu enlisted in the Army and served from 1945 to 1957, according to Tablet. He was first stationed in France and then Austria until selected for a security detachment to guard the prisoners held for the Nuremberg trials. The artist sketched depictions of those under his watch, including Rudolf Hess, Walter Funk and Hermann Goering, among others. His artistic diaries of the trials are housed at the Library of Congress.

Hilu drew daily until his death from his home on the Lower East Side. His work has remained relatively unknown, only appearing in a few exhibitions at galleries mostly around New York City. Poley said the Hilu exhibit was made possible due to the help of art collector Robert Weisman, who has sold, donated and loaned about 25 works of Hilu now part of this exhibition.

Poley and Weisman were first introduced by Cynthia Blackwood, owner of The Frame House in Elkins Park. The two are frequent customers and share a passion for Jewish art. Weisman, a retired Macy’s executive, has collected art for decades. In his possession are “artwork from every conceivable Jewish artist,” including what Weisman believes to be one of the world’s largest collections of Judaica paperweights.

He first came across Hilu’s work a couple years ago and became a fan due to the “bright colors and the themes of old Judaica that you really never saw or heard of.” He has since built a sizable accumulation of the artist’s work, snatching up Hilu’s art whenever possible.
Weisman said he was delighted by the idea of a Hilu exhibition and more than happy to help.

“I was thrilled to get exposure for Mr. Hilu,” Weisman said, adding that he hopes the exhibit shows people “that there is such a thing as Judaica art out there that goes beyond the big ones of (Yaacov) Agam and (Menashe) Kadishman. … There are a lot smaller Jewish artists out there; you just have to search.” 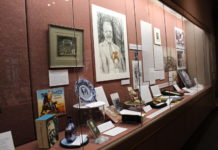 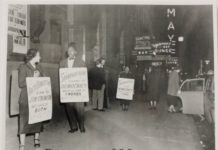 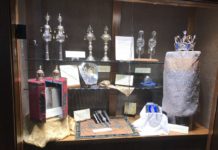 Little-known Museum Making Name for Itself