Monika Rice, Gratz College’s director of Holocaust and Genocide Studies, surveyed the couple dozen students and young professionals sitting in the Tuttleman Library and said aloud what many of them were thinking.

Thank you, she told them, for taking time on an exceptionally sunny, pleasant day to sit in a dark room with people you don’t know and talk about the Holocaust with someone who was there.

Gratz, though it is today largely comprised of online courses taken by students all over the world, still hosts a variety of Jewish programming for locals, along with regular classes. On Jan. 26, it hosted the College Holocaust Symposium.

After an introduction from Naomi Housman, director of institutional advancement, and Gratz President Paul Finkelman, Rice took the microphone.

A native of Poland, Rice is a fairly recent addition to the college. She described how she, a non-Jew, came to be so interested in studying the Holocaust, and laid out some of the basic ethical and moral questions about the Holocaust that have raged since 1945. The field of Holocaust and genocide studies is “flourishing,” she said. With that, she turned it over to Josey Fisher, director of the Holocaust Oral History Archive.

The archive, Fisher explained, is “one of the largest collections of audiotaped testimony in the United States, including interviews with nearly 900 survivors, liberators, resistance force members, those in hiding, rescuers, and other witnesses to the persecution and extermination of the Nazi era.” The collection is a reflection of her belief, she said, and that of many others, that the most engaging, lasting form of Holocaust education comes in the shape of individual stories, rather than facts and figures.

She compared the work of the archive and others like it to that of the Ringelblum Archive, also known as the Oneg Shabbat Archive. The archive is a massive collection of documents that secretly chronicled life in the Warsaw Ghetto from 1939 to 1943, hidden underground in milk crates. To take that sort of historical thinking as a guiding light, Fisher said, is the highest mission of Gratz’s archive.

Following the talks, the students and young professionals watched “I’m Still Here: Real Diaries of Young People Who Lived During the Holocaust.” The 2005 documentary, about 45 minutes long, featured Hollywood actors reading diaries kept by Jewish teenagers during World War II. They described, unsparingly, the bleakness of ghetto life. They wrote about the despair of enforced hunger, the anger and sadness sewed into family life, the feeling of having lost one’s childhood before one was ready. They were Jewish teens of conquered European cities, chronicling the slow-moving tragedy of Nazi rule.

Following the movie, Housman asked a man sitting in the front row if he wanted to take a break before beginning his address. But he declined, and took his place at the lectern.
Danny Goldsmith, 88, was 8 when the German army invaded Belgium in 1940. His father was a plumber, his mother a homemaker, and they lived in relative comfort, along with his sister, Lillian. Speaking without pause, he described the terrifying speed with which the right to participate in public life was stripped from the Jews of Antwerp.

“That’s how fast you can lose your freedom,” he said, clicking through a slideshow of anti-Semitic laws posted around the city, and photos of his childhood.

In 1942, after his father was forced into a labor camp, his mother sent Goldsmith and his sister as far away she could afford. Though the orphanage Goldsmith stayed at was raided in 1944, and Goldsmith himself was literally on a boxcar hurtling toward a camp, he and five other boys were able to escape, and he holed up in Belgium until the war ended.
He was miraculously reunited with his mother and sister, who all moved together to America in 1948. It was not until 1995 that Goldsmith was able to finally confirm what he and his mother had heard, which was that his father had been killed in Auschwitz.

In his closing remarks, Goldsmith stated the obvious: He’s one of the last people who could possibly have a firsthand account of the Holocaust. He pleaded with the audience — using the phrase, “I plead with you” — to share his story and others like it as far as they could. After finishing his talk, a reluctant Q&A session turned into a long, long discussion between Goldsmith and the audience.

Though she would have liked more time for discussion with Goldsmith and of the film, said Davida Vogel, a graduate student at Widener University who attended local Jewish day schools, she was pleased to have a chance to hear Goldsmith speak.

“I want to make sure to take those opportunities when I have the chance,” she said. 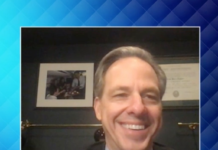 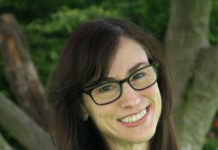 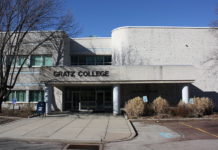