Bernard Brachya Cohen of Center City was known for sharp and quiet cleverness. The retired clinical psychologist, professor and writer was a legend for gifting pun-ridden poems with unique twists for friends on birthdays. He was a master at Scrabble and his family argued that he would have done well on “Jeopardy!”

“It was staggering, his range of knowledge,” his daughter Amy Cohen, of Providence, Rhode Island, said. “Like a good rabbi and a good psychologist, he had a good sense of a pun and was renowned for his wit. … He would come up with things while we were watching ‘Jeopardy!’ and playing Scrabble together that I was just dumbfounded how he knew these things. He just had this encyclopedic knowledge, and we joked that he should have gone on the show. He just read all the time and just knew stuff.”

Cohen was born in Jersey City, New Jersey, the son of Rabbi Jeremiah Cohen, who led Temple Rodeph Zedek in Philadelphia’s Logan neighborhood until retiring in 1963. Cohen planned to follow in his father’s footsteps and enrolled in the Jewish Theological Seminary in New York. However, his faith was shaken after the Holocaust, so Cohen, with his father’s blessing, left JTS during his final term to pursue a psychology career.

Cohen earned a bachelor’s degree at Temple University and a Ph.D. in psychology at New York University. He had a private practice and was on the staffs of several hospitals and schools.

For several years, he taught psychology at West Chester University, holding the rank of professor emeritus. He retired in 1991, then briefly taught in Israel. Despite turning away from the rabbinate, Amy Cohen said Judaism was an important aspect of his life.

“My father described himself, with no hesitation, as a secular Orthodox Jew, which is really accurate actually,” she said. “His involvement with Judaism was much more personal. He raised my sister and I to be very proud of being Jewish and to pursue Judaism in our own ways. He read extensively Hebrew newspapers, was conversant in all aspects of Torah and Talmud, and was extremely involved and up-to-date on what was happening in Israel.”

Amy Cohen recalled how her parents met. One day, her father went on a first date with a woman named Faye. She happened to be running late and sent her friend Selma to find Cohen at the restaurant and let him know. Faye eventually showed up, but the next day Cohen called Selma and asked her out. They were married for 67 years.

“My father’s version is that he sees this woman and it’s not Faye and, after talking to her briefly, says to himself, ‘Oh no, I am in serious trouble. I am going to marry this woman.’”

Cohen was a classical music aficionado and wrote fiction. Ten of his short stories were published in various literary magazines and, as a young man, he won a few awards. But it was in his 80s that Cohen completed his dream of becoming a novelist.

His first book, “A Warning,” was published in 2012 and tells the story of the unraveling of a respected psychiatrist. He followed with “A Marginal Man” in 2014. It features an identity-conflicted Jewish professor.

Cohen is survived by his wife, two daughters and two granddaughters. 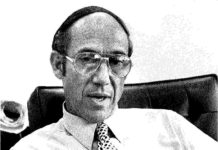