Jews often observe that “our” New Year comes in the fall, not on Jan. 1. But Jan. 1, 2020, became a very special day of Jewish celebration — not of the Earth’s annual trip around the sun, but of something that goes to the core of Jewish culture and identity. At MetLife Stadium in New Jersey and Barclays Center in Brooklyn, New York, some 100,000 Jews gathered to celebrate the completion of the seven-and-a-half-year cycle of studying a page of Talmud a day, with many more watching simulcasts of the proceedings and otherwise engaged in their own celebrations here and around the world.

For centuries, Talmud study was the glue that held widely dispersed Jewish communities together, as they explored the intricacies of Jewish law and scholarship through careful review of the intricate and sometimes obscure texts and teachings of those who perfected the study of oral Jewish law. In 1923, Rabbi Meir Shapiro, a Polish Chasidic rabbi, began a program with the goal of having Jews around the world studying the same page of Talmud each day — daf yomi, or daily page. The celebration this week of the completion of the study of the six “orders” of the Talmud, or Siyum HaShas, is the 13th cycle since Shapiro’s time.

The growth of this program and its focus on uniting Jews through daily study — at every conceivable level and involvement — is noteworthy. And the statistics are impressive: The mounting number of active participants — more than doubling in size with each cycle — is a Jewish success story. Agudath Israel of America, a haredi Orthodox organization, has taken this on as one of its premier projects, and has helped move the daf yomi effort and the daily study of Talmud by tens of thousands of Jews into the mainstream.

Talmud study is traditionally done by two study partners. While this chavruta approach continues, class study has also spread, with multiple daf yomi classes taught daily in many cities and offered through online podcasts. Social media, with its ability to reach almost everyone almost everywhere, and the readily accessible translations of the Talmud text that is available to all, are unifying tools that Shapiro could never have imagined.

Another welcome advancement is the growing number of women who have taken up serious and consistent Talmud study, something that was discouraged throughout most of Jewish history. A global Siyum HaShas for Women, organized by Hadran, is expected to draw more than 3,000 women to Jerusalem’s Binyanei Ha’Uma on Jan. 5.

Recently, at a Jewish communal event, we heard someone say she almost felt like asking “Why be Jewish?” after hearing so much bad news about the spread of anti-Semitism. Jewish study provides an answer. And the Siyum HaShas celebration of the completion of the seven-and-a-half-year Talmud cycle offers another. We applaud that impressive achievement and the success and satisfaction such an accomplishment brings.

A new cycle begins this week. It’s never too late to join. 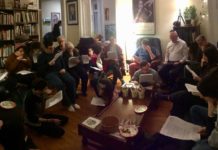