There’s a disheveled and dusty warehouse in Pennsauken, New Jersey, that goes fairly unnoticed. Its beige-painted brick exterior is bland and unwelcoming.

However, looks can be deceiving, as about 30 doctors, lawyers, business owners and other guests make their way inside for, of all things, a wine tasting.

Instead of a restaurant or bar, the Dead Guys Wine Society meets in the warehouse, which is owned by Scot Ziskind.

Different wines were sampled as guests chatted during the Nov. 20 get-together. Wandering around the room was Ruby, a service dog who was less interested in getting pets, more so in snatching unguarded sandwiches.

At 7 p.m., Ziskind stood atop a chair to introduce the night’s guest speaker, physician and author Anthony Mazzarelli, who came to talk about his new book. Ziskind isn’t the largest in size, but he makes up for it with his big personality and enthusiasm. He’s best known by his nickname “Zippy,” a title inherited as a kid from his father, a veteran who earned a Bronze Star and Purple Heart serving in the 94th Infantry Division under Gen. George Patton.

The name is an accurate description of Ziskind, 61, who zips around from guest to guest. Tonight, he is both emcee and waiter, never letting a glass remain empty for too long. The room is packed with friends and clients-turned-friends. One of them is the attorney Daniel-Paul Alva. Their friendship dates back 15 years.

“He’s a very giving person,” Alva said. “There’s not a topic you can’t discuss with him and, for that reason, I can’t say I have any highs or any lows; it’s just a real terrific friendship.”

Ziskind is a wine guy, but not in the typical way. A mechanical engineer by trade, he’s made a living designing wine cellars. He specializes in cooling systems and, under the name ZipCo Wine Cellar Services, is involved in more than 150 projects a year.

Ziskind estimates that about 30% of his business is correcting others’ mistakes. While some get into the line of work out of a love of wine or design, for Ziskind, it’s problem-solving that’s the draw.

“I was always good with my hands. I could never sit behind a desk. I like to take things apart and put them back together again, troubleshooting,” Ziskind said. “It’s the challenge of figuring out what is wrong and fixing it — that’s what always drew me to engineering.”

Ziskind lives in South Philadelphia, but grew up in the Northeast where he attended Abraham Lincoln High School. As a kid, he enjoyed the Boy Scouts, earning the top rank of Eagle. In college, Ziskind worked for various air conditioning companies to help pay his way at Drexel University.

He launched his business in 1978, mainly working in commercial refrigeration and air conditioning at restaurants. But after getting good press for installing a wine dispenser at Jack’s Firehouse, he got into the wine cellar business. In the 1990s, he shifted from commercial to residential clients, building wine cellars in people’s homes.

About two decades ago, Ziskind launched one of his most unique business ventures: My Cellar, which is akin to a Fort Knox for wine lovers. The refrigerated warehouse is home to rentable storage lockers for people in condos and small apartments who don’t have the space to store their excess wine long-term.

“This business, the storage facility, actually started on a dare from a friend of a friend who we don’t like,” Ziskind said. “And he said it was the stupidest idea that he ever heard, that it would never work. And I said, ‘Watch me.’”

My Cellar has succeeded, however, and been written up in publications including The Philadelphia Inquirer and The Wall Street Journal.

Ziskind found himself in an interesting predicament about three years after starting the venture. One day, a lawyer called and explained that his client had died and a treasure trove of wine was discovered in his basement. Not knowing what to do with the stash, he reached out to Ziskind.

In turn, he gave the lawyer two options. The first was to get the wine inventoried and sent off to auction in New York. The second was for Ziskind to come over with a shoebox full of cash, price the wine and buy the whole lot.

”And there was a pause, and the lawyer said, ‘I like the second option better,’” Ziskind said.

With the wine inventory in hand, Ziskind began selling bottles to close friends and other associates. Eventually, they started meeting at restaurants or Ziskind’s warehouse to drink it.

It’s a casual affair — the kind where suits and ties aren’t required and, in fact, are discouraged. Somebody jokingly referred to the group as the Dead Guys Wine Society, and the name stuck.

When not at work or with the club, Ziskind spends his time with family or at shul. His wife, Marice Ziskind, owns a paint-your-own pottery studio in Philadelphia called The Expressive Hand. Two of the couple’s sons have performed in various local rock bands, Miles Ziskind on drums and Lev Ziskind on guitar. Their eldest son, Harrison Ziskind, was killed in a car accident in Colorado in 2016.

Ziskind has been member of Society Hill Synagogue for three decades. There he plays the shofar, an instrument he learned after transitioning from the trumpet.

“When I was 12, we went to services, and the guy who played shofar was really, really bad, and I said, ‘I could play that thing,’” Ziskind said. “And it was so loud, they heard me upstairs.”

Now after playing for most of his life, Ziskind said he’s retiring from the shofar so other congregants get a chance to play.

As for work, though, Ziskind isn’t slowing down anytime soon. With his expertise in climate control, for the past few years he’s made “a left hand turn,” consulting with marijuana growers about their facilities.

Others may come and go, but Ziskind will continue to do what he does best.

“I’ve been in business for over 42 years in January,” Ziskind said. “I’ve been through a lot of presidents, a lot of different economies, and I’m still going strong. I may not be setting the world on fire making zillions of dollars, but I make a very comfortable living.” 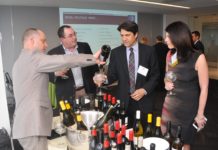 Israeli Wine: Not Your Bubbe’s Manischewitz