It’s one thing to conduct a Shabbat service, but it’s something completely different to lead one of the country’s largest Shabbats.

Rabbi Jill Maderer was up to the challenge; the senior rabbi at Congregation Rodeph Shalom in Philadelphia co-led Friday services at the 75th annual Union for Reform Judaism Biennial.

“There are 5,000 people filled with spirit and singing and praying and lots of incredible energy and, because of the size, it’s really quite a production,” Maderer said. “Leading up to it I was nervous — it was a completely different expectation. We worked on it for many months. And then, once I was actually leading it, the nerves melted away because I was excited to feel connected to everybody.”

There were 525 congregations from 54 states and provinces and 75 international congregations represented at one of the largest Jewish religious conferences held in the United States. Clergy, educators, lay leaders and youth leaders traveled to the McCormick Place convention center in Chicago to take part from Dec. 11-15 in sessions on social justice, politics, Israel and Torah study.

“This biennial focuses on the ways the Reform Jewish movement uses our strength to do good,” URJ President Rabbi Rick Jacobs said in a press release. “We are thinking differently, collaborating across our network of congregations and communities, and enhancing important partnerships to strengthen the future of the entire Jewish community. Biennial will introduce several bold and impactful actions that the URJ will be leading throughout 2020 to address our most significant priorities — by connecting more individuals to a more meaningful Jewish life and by helping bring about more justice and wholeness in the world.”

One of those bold and impactful actions was the passing of a resolution involving reparations for slavery. Delegates voted to approve a resolution calling for the URJ to “advocate for the creation of a federal commission to study and develop proposals for reparations to redress the historic and continuing effects of slavery and subsequent systemic racial, societal, and economic discrimination against black Americans.”

Several clergy from Greater Philadelphia attended the biennial, including Rabbi David Straus of Main Line Reform Temple in Wynnewood. He said it was “an awesome experience to be in a room of 5,000 engaged people.” He said the best part was the Shabbat service, adding that it was an interesting change of pace to be a service participant rather than the one leading it.

There was also Rabbi Michelle Pearlman of Beth Chaim Reform Congregation in Malvern.

She said the conference was an opportunity to reconnect with friends and colleagues. The best part for her was witnessing the more than 20 people from her congregation become inspired and empowered. Pearlman enjoyed attending Maderer’s service, which she described as skillfully and artfully done.

“Every time I go it gets better,” Pearlman said. “The highlight is always the worship services. The worship services are very powerful, especially in this time of darkness, pain and anti-Semitism in the world. It’s very empowering to be with 5,000 Jews praying in one space, to be in space where people love Torah and they love our tradition and they care about our Jewish community.”

The conference hosted 150 learning and training sessions led by 400 presenters.

One of them was Rabbi Lance Sussman of Reform Congregation Keneseth Israel in Elkins Park, who gave a 75- minute presentation titled, “Saving Confirmation: A Way Forward” that described the history of confirmation, its relationship to the Reform movement and its future. He described the biennial as a “homecoming” and an opportunity to socialize with colleagues and others who share his values.

“The Reform movement in Judaism is vibrant. It’s over 900 congregations,” Sussman said. “It has more than a dozen summer camps. It has a rabbinic school system. It is building an infrastructure in Israel. It has a global presence. And it’s very emotional and inspirational to meet people from all those different dimensions who are working for the same things you believe in.” 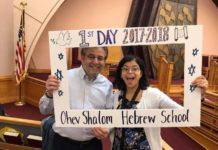 Friday Nights at Richboro Temple to ‘Rock’ the Sabbath