For one night only, the Notorious RBG is playing Philadelphia.

Supreme Court Justice and pop culture icon Ruth Bader Ginsburg will be on hand Dec. 19 to be honored by the National Museum of American Jewish History with the Only in America Award, which amounts to induction into NMAJH’s hall of fame.

NPR legal affairs correspondent Nina Totenberg, who is a close friend of Ginsburg’s, will emcee an event that features speeches by pop historians, legal scholars and Totenberg herself focusing on Ginsburg’s legal and social influence but also her less publicized life, interests and passions as an ordinary citizen.

“Each speaker has both a personal connection to the justice and can also speak to a piece of her legacy,” NMAJH Director of Communications and Public Engagement Emily August said.

Ginsburg, the second-longest tenured justice behind Justice Clarence Thomas, is expected to speak, likely in response to the various speeches and tributes that will precede her, August said.

Totenberg is expected to speak about her relationship with Ginsburg as well as the judge’s legacy.

Irin Carmon and Shana Knizhnik will also speak. They co-wrote the book “Notorious RBG: The Life and Times of Ruth Bader Ginsburg” and co-curated the exhibit that originated in Los Angeles and is now at NMAJH through Jan. 12.

Knizhnik created the Tumblr that launched the “Notorious RBG” into the zeitgeist after a fiery 2013 dissent from Ginsburg. In that case, Shelby County v. Holder, the court threw out what Ginsburg considered to be an indispensable part of the Voting Rights Act.

Dissenting vehemently, Ginsburg wrote: “Hubris is a fit word for today’s demolition of the VRA.” She ultimately broke with dissenters’ traditional rules of decorum by closing with “I dissent,” as opposed to the time-honored “I respectfully dissent.”

Ginsburg had been on the court for 20 years by then, but Carmon’s and Knizhnik’s attentions launched her into the pop-culture stratosphere.

“They both have personal stories to share about the justice,” August said of the authors. “But they also have a lot to say about this pop culture icon and how she became the Notorious RBG and how there’s actually something meaningful and substantive behind that. They’ll be talking about her both as this icon but also about her identity in a different kind of way. Irin’s words were, ‘But she’s also a Jewish bubbe.’”

The evening will include a performance by a Washington National Opera youth program singer, who will perform an aria from Beethoven’s “Fidelio,” a piece about a strong woman who fights for what she believes in, and “God Bless America,” the composition by Irving Berlin, a posthumously inducted member of Only in America.

Ginsburg becomes the 21st inductee to the Only in America gallery; she is only the fourth still living. The other three are Sandy Koufax, Barbara Streisand and Steven Spielberg.

Ginsburg was actually already part of the gallery, in a way — she provided the narration for the section devoted to former Justice Louis Brandeis, the first Jewish justice, whose commitment to civil liberties and civil rights Ginsburg has cited as an inspiration.

But Ginsburg is the right Jewish justice to honor in 2019, according to museum officials.

“It’s particularly appropriate this year, not just because of the exhibit but also because this is the year celebrating the anniversary of the 19th Amendment (which gave women the right to vote),” NMAJH Interim CEO Misha Galperin said. “And issues that she has championed in her career and in her life are particularly important today.”

Ginsburg, who became the second woman, after Sandra Day O’Connor, to serve on the court when she was appointed by President Bill Clinton in 1993 has long been viewed as among the court’s strongest liberal voices. She is known for stirring dissents in cases where majority holdings have been thought to adversely affect women’s rights and civil liberties.

This past year, Ginsburg was the focus of a biopic titled “On the Basis of Sex,” a title that refers to cases early in Ginsburg’s legal career, when she was credited with expanding the scope of the 14th Amendment’s Equal Protection to provide heightened judicial scrutiny to government discrimination based on sex.

“She’s a hero,” Galperin said, “and we live in an age where finding heroes is not that easy.”

The Only in America event at NMAJH is sold out, but the event will be livestreamed for free on Facebook. 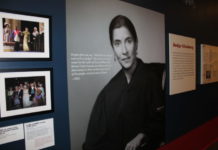 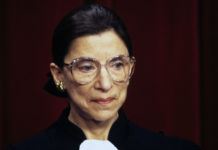