Update: 12/16/19, 11:43 a.m.: This post has been updated to correct Silverman’s erroneous claim that Abe Levis and Adolph Levis were related. They were not from the same family.

Jerry Silverman began Hidden City’s tour of Philadelphia’s Lost Jewish Quarter as he might’ve during his 36 years as a high school math teacher in Philadelphia: He took roll.

He then launched into a quick recitation of Philadelphia’s Jewish history from the pre- Colonial period to the late 1800s — that period (from 1880-1920) is the tour’s main focus.

The tour began at the Rebecca Gratz Club at 532 Spruce St.; Silverman gave a brief background colored with idiosyncratic commentary.

Built in the early 1900s as a maternity ward for Jewish women, the Gratz Club would become a boarding house for immigrant girls, both Jewish and non-, before becoming, “like everything else in this city, condos.”

After informed speculation as to why the beautiful philanthropist Gratz, a muse to early 19th-century literati, never married (a rumored predilection for non-Jewish men), the sold-out tour was off, walking south down Fifth Street toward Queen Village and the old synagogues and marketplaces of Philadelphia’s “Lost Jewish Quarter.”

The area between Spruce and Christian and Second and Sixth was once the Philadelphia equivalent of New York’s Lower East Side, just on a smaller scale, said Silverman, whose quick recall of the historical and obscure, and dry, deadpan humor have kept his tours sold out for the past four months.

In 1860, he said, Philadelphia had five synagogues for 8,000 Jews. By 1915, there were roughly 200,000 Jews in the city and some 150 synagogues throughout the quarter. Though, Silverman warned, “you have to understand that a synagogue wasn’t like what we just saw (B’nai Reuben and B’nai Abraham); a synagogue was 10 adult men and somebody’s living room.”

Several historic synagogues were seen and discussed. A surprising number still operate as synagogues; even more have been retrofitted to house condo units, to Silverman’s resigned discontent.

One, the former B’nai Reuben at Sixth and Kater streets, opened as a synagogue in 1904 and became condos in 2015.

“When they remodeled the building … the workingmen were grinding out all the Hebrew,” Silverman said. “It was not an act of anti-Semitism, just an act of stupidity.”

“I’m glad they did something to the building instead of wrecking it,” he continued. “I was told that (the developers) didn’t want the building to look too religious, that people wouldn’t want to live in a religious-looking building.”

The tour is suffused with anecdotes like these, linking the bygone with the contemporary; as a neighborhood fixture, Silverman’s not stingy with the straight talk. He is comprehensive, compact (verbally and physically) and precise, walking in a quick staccato shuffle and speaking in same.

The question he invariably gets: Which synagogue is the oldest?

It depends on the criteria, he said.

Though the “lost Jewish quarter” contains no shortage of them, old synagogues are just a fraction of what tour groups see.

Like today, Queen Village’s Fabric Row was a place for fabric — and almost everything else. Framed black-and-white photos in today’s storefront windows show the old South Fourth Street commercial district, where butcher, baker and all purveying peers were Jewish.

Pushcarts and makeshift market stalls lined streets that would’ve smelled of pastrami and bialys, pickled cabbage and horse manure — the area around Famous 4th Street Deli was home to Philadelphia’s first horse-drawn trolley system, the largest in the country in 1876.

The old quarter saw Jews involved in virtually every service and industry from matzah ball soup to nuts to … Slim Jims?

Opened by Abe Levis and his wife Anna in 1895, Levis Hot Dogs became an institution. Many of a certain age recall Levis’ signature Champ Cherry Soda or the old claim that Levis was the first to marry sausage and bun, thereby inventing the modern hot dog.

But fewer have heard how another neighborhood resident, Adolph Levis, amassed a fortune. Adolph Levis began selling a dried, pepperoni-like meat on a stick and, in 1967, sold the snack to General Mills for $20 million.

“If you go down to Boca Raton,” said Silverman, “you will see the Adolph and Rose Levis Jewish Community Center — all built on the back of pork.”

Silverman got some of his best laughs of the day with that one.

Like a single brilliant golf shot, these laughs keep Silverman coming back.

“It’s a combination of loving Philly and being Jewish and curious … and of being a frustrated actor,” Silverman said, citing the principal reasons that keep this one-time Hebrew school principal coming back for more. “When you’re a teacher, you’re an actor, and when you a have a tour, you have an audience.” 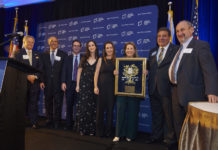 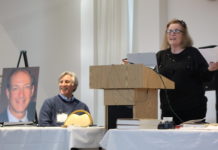 Opinion | I Was 8 When Kristallnacht Happened