Florida is famous for its coastal cities, beaches and golf course communities. But the central part of the state has its share of worthy attractions, too.

One of the most interesting and unique is the Bok Tower and Gardens, near the city of Lake Wales.

Built by Edward Bok, a Dutch immigrant who had a successful career as an author and magazine publisher, the Bok Tower and Garden opened in 1929 as his gift to the United States. Bok, the grandfather of a Harvard University president, is buried on the site.

The large grounds of the former Bok Estate house a 20-room Mediterranean-style mansion named Pinewood, extensive gardens and trails and the impressive neo-gothic and art deco Singing Tower. The tower itself is a marble and coquina structure that houses a rare 60-bell carillon that offers concerts daily. Also on the grounds are a visitor center, a restaurant and gift shop.

The tower lies atop Iron Mountain on the second highest point in Florida on the Lake Wales Ridge — a 150-mile-long sand ridge that was an island when the rest of Florida was under water eons ago, allowing distinctive flora and fauna to flourish there that are worth seeking out. The base of the beautiful 205-foot-tall tower is at 298 feet above sea level, making the tower visible for miles on the surrounding flatlands on either side of the ridge.

The lush gardens surround the tower were designed by the famous landscape architect Frederick Law Olmsted Jr. Paved trails wind throughout the gardens and to and from the tower.

Admission is $15 and well worth it.

This is a perfect place for season-appropriate Florida casual clothing for walking, etc. Since many destination weddings are held there, you might see attendees dressed to the hilt.

Over 50 Advantage: Beautiful music and great views make this a good place to relax.

Simply Smart Travel Tip: You’ll need a car for Bok Tower since it is in a rural area not served by public transportation.

When to Go: Anytime. Winter has the most pleasant weather and the biggest crowds. Florida’s summers are hot and sticky. November and March are great shoulder season times.

Where to Stay: Lake Wales, Winter Haven and nearby areas host many national chain hotels.

Rural central Florida is not a hotbed of Judaism and Jewish life, but if you look hard enough and/or are willing to travel a little, Jewish life and resources can be found.

While the region around Bok Tower does not house any large Jewish communities, there is a Reform congregation (Beth Shalom) in Winter Haven and a Chabad congregation in Lakeland. Significant Jewish communities within driving distance are found in Tampa-St. Petersburg to the west and Orlando to the northeast. There are Hillel Foundations in Tampa at the University of South Florida and in Orlando at the University of Central Florida in Orlando.

At Bok Tower itself, the heavy and ornate brass door leading into the tower is decorated with biblical representations telling the story of the Book of Genesis. This work of art and the wrought iron gates on the north side of the tower were created by famous metalworker Samuel Yellin, a Jewish immigrant from Poland.

In nearby Fort Meade, a prominent member of the Jewish community in the late 19th century was Philip Dzialynski. 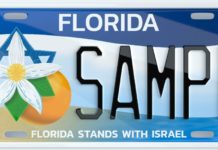 Floridians Can Now ‘Stand With Israel’ on Their License Plates 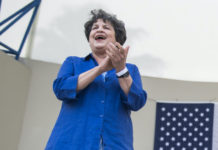 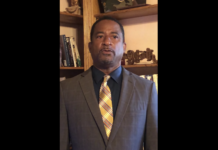